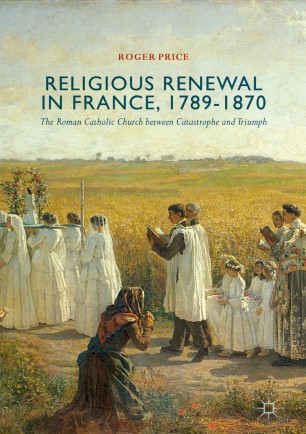 The Roman Catholic Church between Catastrophe and Triumph

This book provides a study of the manner in which the Roman Catholic Church in France responded to successive revolutions between 1789 and 1870 as well as to the cultural upheaval associated with accelerating socio-economic change. It focuses on the Church as an institution engaged in a dynamic process of (re)Christianization and determined, as the only repository of the true faith of Jesus Christ, to fortify belief , and to combat the ‘Satanic’ forces of moral corruption and revolutionary chaos and create a ‘counter society’, the société parfaite. Discussion of the Church as an institution in crisis, of the recruitment, instruction and mind-sets of its bishops, parish clergy, and the members of religious orders, of its hierarchical structures and internal discipline, and of the need to compensate for the losses suffered during a period of revolutionary upheaval, provides the basis for an exploration of its evolving doctrine(s) and sense of purpose; for an assessment of the pastoral care provided to parish communities; and of the leadership and moral qualities of the clergy; before final consideration of the reception of the religious message(s).

Roger Price is Emeritus Professor of History at Aberystwyth University, UK, and a Fellow of the Royal Historical Society. He has published a large number of articles and books on the economic, social and political history of nineteenth-century France and Europe. Previous publications include The French Second Empire: An Anatomy of Political Power (2001); People and Politics in France, 1848-1870 (2004); A Concise History of France(2014); Documents on the Second French Empire, 1852-1870 (Palgrave, 2015); and The Modernization of Rural France: Communications Networks and Agricultural Market Structures in Nineteenth-Century France (2017). In addition to this book, his study of The Church and the State in France, 1789-1870: Fear of God is the Basis of Social Order will soon be published by Palgrave.

“Religious Renewal will be most useful to scholars for its detailed attention to clergy-lay relations at the parish level.” (Thomas Kselman, Journal of Modern History, Vol. 91 (4), December, 2019)
Buy options