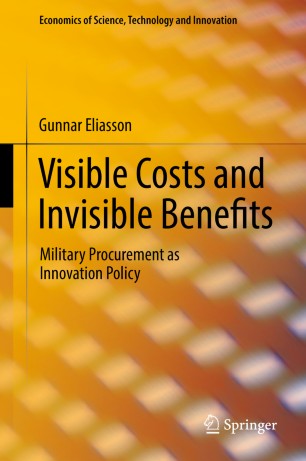 Part of the Economics of Science, Technology and Innovation book series (ESTI)

This book examines the historic role of professional and demanding military customers in industrial development. Particular emphasis is paid to public procurement of military equipment as a catalyst for innovation; and the civilian commercialization of military technologies (from gunpowder and cannons to submarines, missiles and aircraft) is documented by many case illustrations that show how macro-level productivity advance has been generated. A complementary volume to Advancing Public Procurement as Industrial Policy (2010), which focused on the spillover effects of the Swedish combat aircraft, Gripen, in this book Gunnar Eliasson widens the perspective to cover product development across the Swedish defense industry, with an emphasis on regional economic development and macro-economics, inter alia through the involvement of Saab (aircraft) and Kockums (submarines) in partnership ventures in Australia, Norway and Brazil.

The volume is organized into four parts. Part one examines the historical transformation of the Swedish economy over the past three centuries from agriculture and raw materials to an advanced industrial economy. Part two presents detailed case studies to illustrate the spillover effects of procurement projects and military-industrial partnerships. Part three explains the spillover phenomenon theoretically within a dynamic micro- to macro-economic perspective. Particular emphasis is placed on the empirical credibility of model-based economy-wide and dynamic cost-benefit calculations. The book concludes with a section on fostering industrial development through public procurement. The result is a book that will appeal to economists in the industrial economics and management fields; to technical, marketing and purchasing executives in business; and to policy makers in public procurement concerned with innovation and long-run industrial development.

Gunnar Eliasson is Professor Emeritus of Industrial Economics/Dynamics at the Royal Institute of Technology (KTH) in Stockholm. He is associated with the Swedish Entrepreneurship Forum in Stockholm as a senior researcher and adviser. He was previously President of the Industrial Institute for Economic and Social Research (IUI, now IFN) in Stockholm, and before that Chief Economist and Director of the Economic Policy department at the Federation of Swedish Industries. He is a member of the Swedish Academy of Engineering Sciences (IVA), and has served on several firm and other boards, among them the Royal Institute of Art. He has been a consultant to many firms in Sweden and abroad, to Government agencies and to the OECD. From 1994 to 1996 he was the President of the International Joseph A. Schumpeter Society.

Gunnar Eliasson has published many books and journal articles in the fields of industrial economics, the theory of the firm, business economic planning and management, labor and education economics and simulation modeling. He is the father of the Swedish Micro to Macro simulation model MOSES and the theory of the Experimentally Organized Economy and of Competence Blocs, in which customer competence and commercialization markets guide the selection of projects that endogenously drives economic development. Among the articles can be mentioned the presentation of the Micro to Macro model in the American Economic Review (1977), “The firm as a competent team” (1990) in the Journal of Economic Behavior and Organization (JEBO) and the “Incomplete Schumpeter Stockholm School connection” (2014) in the Journal of Evolutionary Economics. The latter presents the theory of an experimentally organized economy as a merger of Austrian Schumpeterian and Stockholm School economics, a theme in evolutionary economics and complexity economics that is further pursued in this new book.

His books in English include The Credit Market, Investment Planning and Monetary Policy – An Econometric Study of Manufacturing Industries (1969, short version of doctorate thesis 1968 in Swedish), Business Economic Planning (1976), Technological Competition and Trade in the Experimentally Organized Economy (1987), The Knowledge Based Information Economy (1990), Firm Objectives, Controls and Organization (1996), The Birth, the Life and the Death of Firms (2005), and Advanced Public Procurement as Industrial Policy - The Aircraft Industry as a Technical University (Springer 2010). There is also a study (in Swedish) on the prospects of transforming Swedish health care into a globally competitive export industry (2009) and another, authored together with his wife, Ulla, on the fifteenth century art markets in Northern Italy and Florence (1997), an expanded English version of which is in the works.