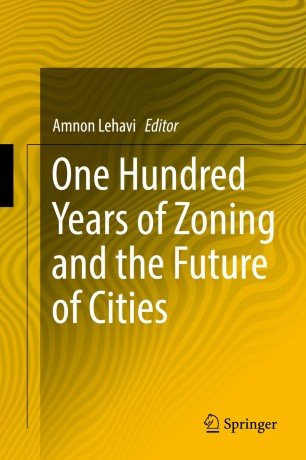 One Hundred Years of Zoning and the Future of Cities

This book reconsiders the fundamental principles of zoning and city planning over the course of the past one-hundred years, and the lessons that can be learned for the future of cities. Bringing together the contributions of leading scholars, representing diverse methodologies and academic disciplines, this book studies core questions about the functionality of cities and the goals that should be promoted via zoning and planning. It considers the increasing pace of urbanization and growth of mega cities in both developed and developing countries; changing concepts on the role of mixed-use and density zoning; new policies on inclusionary zoning as a way to facilitate urban justice and social mobility; and the effects of current macrophenomena, such as mass immigration and globalization, on the changing landscape of cities. The book’s twelve chapters are divided into four parts, each addressing different aspects of zoning and planning by combining theoretical analysis with a close observation of diverse case studies from North America and Europe to the Middle East and developing economies. Part I offers a critical analysis of the conventional account of zoning as a top-down form of land-use regulation starting with the 1916 NYC code. Part II studies how contemporary concepts of zoning, both substantive and procedural, impact the built environment across today’s cities. Part III revisits the economic foundations of zoning and urban policy in the context of domestic markets, as compared with the regulatory and market effects of interstate agreements on cross-border real estate investments. Part IV analyzes the dominant, yet often implicit social and political motives that are driving zoning policies across different countries. This volume’s focus on the ties between zoning policy and economics, politics, socioeconomic conditions, and the local-to-global scope of governance will appeal to scholars and students of political science,  economics, law, planning, sustainability, geography, sociology, and architecture, as well as policy-makers and practitioners, especially those in developing countries and transitional and emerging economies.

Prof. Amnon Lehavi (Yale, J.S.D) is the Atara Kaufman Professor of Real Estate, Radzyner Law School, and Academic Director, Gazit-Globe Real Estate Institute, Interdisciplinary Center (IDC) Herzliya.
Prof. Lehavi (ed.) is a leading authority on property, real estate, land use controls, international economic law, and law and globalization. He is the author of The Construction of Property: Norms, Institutions, Challenges (Cambridge University Press, 2013) and the editor of Gated Communities (Nevo Press, 2010). Prof. Lehavi has published extensively in top journals, including the Columbia Law Review, Virginia Law Review, Texas Law Review, Georgetown Law Journal, Minnesota Law Review, Law and Social Inquiry, and Yale Journal of International Law. He has won numerous prizes, including the 2007 Tzeltner Award for an outstanding young scholar and the 2008, 2010, and 2014 IDC Award for excellence in scholarship. Prof. Lehavi served as the Chairperson of the Israeli Association of Private Law (2012-2013) and the Rosalinde and Arthur Gilbert Foundation Visiting Professor at the University of California, Berkeley (2013-14). Prof. Lehavi has been recently appointed as the 2016 Global Law Visiting Chair at Tilburg University, the Netherlands.