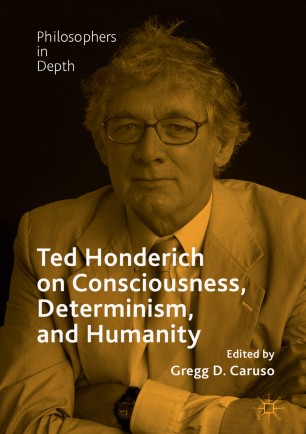 This fascinating collection assembles leading philosophers of mind, metaphysics and morals to examine the impact of the work of Ted Honderich, Grote Professor Emeritus of the Philosophy of Mind and Logic at University College London, UK. The insightful analyses are accompanied by replies from Ted Honderich himself, providing the most comprehensive critical treatment of his accomplishments to date.

The essays focus on three major areas of Honderich’s work: his theory of actual consciousness; his extensive and ground-breaking work on determinism and freedom; and his views on right and wrong, including his Principle of Humanity and his writings on terrorism. This volume is essential reading for all scholars interested in the work of Ted Honderich, and in the debates surrounding the philosophy of mind, metaphysics, free will and moral responsibility, and social and political philosophy.

Gregg D. Caruso is Associate Professor of Philosophy at SUNY Corning, USA, and Co-Director of the Justice Without Retribution Network. He is the author of Free Will and Consciousness and the editor of Neuroexistentialism: Meaning, Morals, and Purpose in the Age of Neuroscience (co-edited with Owen Flanagan), Science and Religion: 5 Questions, and Exploring the Illusion of Free Will and Moral Responsibility.

“A first-rate collection of essays on Ted Honderich’s influential work on a variety of topics – including consciousness, determinism, free will, the principle of Humanity, right and wrong, and terrorism – along with productive replies by Honderich.” (Alfred Mele, William H. and Lucyle T. Werkmeister Professor of Philosophy, Florida State University, USA)

“Ted Honderich has long been known for the forthright expression of his controversial opinions on a wide range of issues: on consciousness, freedom, and on the morality of today’s political situation. He has an unwavering commitment to following through the consequences of his deepest convictions, even as far as accepting consequences from which many would recoil. In this he resembles that other radical philosopher, Bertrand Russell, who believed that a philosopher should follow the wind of the argument wherever it leads. The extent of his achievement can be measured in this fine collection: Gregg Caruso has assembled a formidable and distinguished group of philosophers to engage with Honderich — sometimes sympathetically, sometimes more critically, but always with respect. This volume is a credit to the philosopher whom it honours, and it is full of excellent philosophy. Highly recommended.” (Tim Crane, Professor of Philosophy, Central European University, Hungary)