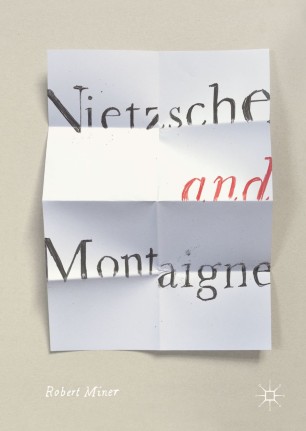 This book is a historically informed and textually grounded study of the connections between Montaigne, the inventor of the essay, and Nietzsche, who thought of himself as an “attempter.”   In conversation with the Essais, Nietzsche developed key themes of his oeuvre: experimental scepticism, gay science, the quest for drives beneath consciousness, the free spirit, the affirmation of sexuality and the body, and the meaning of greatness.

Robert Miner explores these connections in the context of Nietzsche's reverence for Montaigne—a reverence he held for no other author—and asks
what Montaigne would make of Nietzsche. The question arises from Nietzsche himself, who both celebrates Montaigne and includes him among a small number of authors to whose judgment he is prepared to submit.

Robert Miner is Professor of Philosophy at Baylor University.

“This is a most welcome addition to the literature on Nietzsche, providing the first concerted study of the relation between Nietzsche and Montaigne. Robert Miner covers key topics such as scepticism, perspectivism, asceticism, and greatness,  and in each case his book sparkles with fresh and arresting insights. This study can be highly recommended to anyone with a passion for free-spirited philosophy and who sees philosophy not simply as an abstract, technical discipline but as a way of life.” (Keith Ansell-Pearson, University of Warwick, UK)

“Robert Miner wisely focuses his attention on the unique ways in which Montaigne and Nietzsche stage their respective interventions. Both thinkers are concerned to arrive at a ‘deeper,’ more comprehensive truth about moral psychology, and both recognize the need to approach these questions in a novel, idiosyncratic, high-stakes, and self-critical fashion. Both are aware of the limitations of standard approaches to moral psychology, and both wish to resist the common pieties and lazy prejudices that ensnare lesser scholars. This book will open up a rich and fertile field of comparative scholarship devoted to the Montaigne-Nietzsche pairing.” (Daniel Conway, Texas A&M University, USA)

“In Nietzsche and Montaigne, Robert Miner has created for his readers a dialogue of the dead, in which Nietzsche and the author he revered like no other find themselves united in their attempt to cultivate freedom of spirit while having quite different ends in view: where Nietzsche flies towards a high greatness that will give the earth a meaning, Montaigne aims lower, attaining greatness by making himself at home on the earth he walks upon. The contrast is compelling. Combining philological and philosophical skills, celebrating the joys of earthbound and airborne life alike, Nietzsche and Montaigne will have its readers sprouting legs and wings of their own.” (Richard Scholar, Oriel College, University of Oxford, UK)

“Michel de Montaigne was one of the few writers for whom Friedrich Nietzsche expressed consistent admiration across the course of his career. Robert Miner is surely correct to describe them as kindred spirits. In this ambitious undertaking,  Miner brings these two notoriously complex and elusive thinkers into conversation on a range of important topics – skepticism, perspectivism, science, self-knowledge, sexuality, free spirits, and greatness. While several scholars have compared and contrasted Nietzsche and Montaigne on specific topics, Miner’s is the first sustained treatment of this intriguing and rewarding dialogue. His book a very welcome accomplishment.” (Ruth Abbey, University of Notre Dame, USA)

“With both a commanding knowledge of both Nietzsche and Montaigne and an uncommon clarity of prose, Miner enacts a beautiful and urgent conversation between these two untimely thinkers.  The result is a strikingly original study that will reward careful examination by students and specialists alike.” (Jeffrey A. Bernstein, College of the Holy Cross, USA)