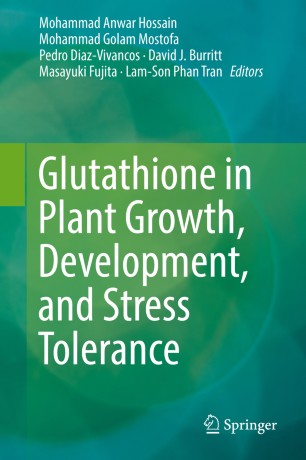 Glutathione (γ-glutamyl-cysteinyl-glycine; GSH), a ubiquitously distributed sulfur containing antioxidant molecule, serves as a crucial player in regulating plant growth, development and abiotic stress tolerance. It is one of the most powerful low-molecular weight thiols and rapidly accumulates in plant and animal cells under stress. Recent in-depth studies on GSH homeostasis (synthesis, degradation, compartmentation, transport, and redox turnover) and the role of GSH in cell proliferation and abiotic stress tolerance have created opportunities for plant biologists to conduct research aimed at deciphering mechanisms associated with GSH-mediated plant growth and stress responses. GSH has also been proposed as a potential regulator of epigenetic gene regulation and so GSH might play important roles in the environmental regulation of gene expression in plants. The dynamic relationship between GSH and reactive oxygen species (ROS) has been well documented and GSH has been shown to participate in numerous metabolic and cell signaling processes, including protein synthesis and amino acid transport, DNA repair, and the control of cell division and programmed cell death. Two genes, glutamylcysteine synthetase (GSH1) and glutathione synthetase (GSH2), are involved in GSH synthesis, and genetic manipulation of these enzymes interferes with cellular levels of GSH. Any fluctuations, an increase or decrease, in cellular GSH and oxidized GSH levels has profound effects on plant growth and development, as GSH is associated with the regulation of the cell cycle, redox signaling, enzymatic activities, defense gene expression, systemic acquired resistance and xenobiotic detoxification. Being a major component of ascorbate-glutathione (AsA-GSH) and glyoxalase (Gly) pathways, GSH helps to govern the level of plant oxidative stress by modulating ROS and methylglyoxal (MG) detoxification in plants. Although there has been significant progress made investigating the multiple roles of GSH in abiotic stress tolerance, many aspects of GSH-mediated abiotic stress responses and stress tolerance require additional research if GSH metabolism is to be manipulated to help develop abiotic stress-tolerant and nutritionally improved crop plants. This book will provide information the roles of GSH in plants that are directly or indirectly involved in many important metabolic processes and physiological functions, including GSH synthesis, compartmentation and transport, GSH-mediated ROS and MG detoxification, as well as GSH signaling functions in modulating plant growth, development and responses to abiotic stresses. The main objective of this volume is to promote the important role of GSH in plant biology by supplying basic, comprehensive and up to date information for advanced students, scholars and scientists interested in or already engaged in research that involves GSH. Finally, this book will be a valuable resource for future GSH-related research, and can be considered as a textbook for graduate students and as a reference book for front-line researchers working on the relationships between GSH and abiotic stress responses and toleranc​e.

Mohammad  Anwar  Hossain is a professor in the Department of Genetics and Plant Breeding, Bangladesh Agricultural University, Mymensingh-2202, Bangladesh. He received his B.Sc. in agriculture and M.S. in genetics and plant breeding from Bangladesh Agricultural University, Bangladesh. He also received an M.S. in agriculture from Kagawa University, Japan, in 2008 and a Ph.D. in abiotic stress physiology and molecular biology from Ehime University, Japan, in 2011 through a Monbukagakusho scholarship. In November 2015, he moved to Tokyo University, Japan, as a JSPS postdoctoral researcher to work on isolating low-phosphorus stress-tolerant genes/QTLs from rice. He has over 50 peer-reviewed publications on important aspects of plant physiology and breeding, plant nutrition, plant stress responses and tolerance mechanisms, and exogenous chemical priming-induced abiotic oxidative stress tolerance. He has edited five book volumes, including this one, published by CRC Press, Springer, and Elsevier. He is a professional member of the International Metabolomics Society, Bangladesh Society of Genetics and Plant Breeding, Bangladesh Association for Plant Tissue Culture and Biotechnology, and Seed Science Society of Bangladesh.

Mohammad Golam Mostofa is an associate professor of biochemistry and molecular biology at Bangabandhu Sheikh Mujibur Rahman Agricultural University, Bangladesh. He received his B.Sc. and M.S. in biochemistry and molecular biology from the University of Dhaka, Bangladesh. He also obtained his M.S. in agriculture from Kagawa University, Japan, in 2012 and Ph.D. in plant and environmental sciences from Ehime University, Japan, in 2015 under a Monbukagakusho scholarship. His research focuses on plant physiology and biochemistry, abiotic stress tolerance in plants, oxidative stress responses, and crosstalk between phytohormones and signaling molecules under environmental stresses. His published works deal with the roles of signaling molecules in mitigating abiotic stresses in plants. He has authored over 25 peer-reviewed articles published in international journals. In September 2016, he joined the Signaling Pathway Research Unit at RIKEN Center for Sustainable Resource Science, Japan, as a JSPS postdoctoral researcher to work on the roles of the strigolactone phytohormone and its interactions with other signaling molecules under abiotic stresses in plants.

Pedro Diaz-Vivancos is an associate researcher in the Plant Breeding Department at CEBAS-CSIC (Murcia, Spain). He received his B.Sc. in biological sciences from the University of Murcia and his Ph.D. in 2007 in agricultural and food technology from the University of Cartagena (Spain). He has worked in 2008 and 2009 at Newcastle and Leeds Universities (UK) as a postdoctoral scientist on the role of glutathione in the regulation of cell proliferation and plant development. His main research interests are the study of the role of antioxidative metabolism in plant development and in plant stress responses, including the induction of tolerance against environmental stresses in plum plants by increasing their antioxidant capacity by genetic engineering. He has over 40 peer-reviewed publications and 2 book chapters.

David  J.  Burritt is an associate professor in the Department of Botany, the University of Otago, Dunedin, New Zealand. He received his B.Sc. and M.Sc. (Hons) in botany and his Ph.D. in plant biotechnology from the University of Canterbury, Christchurch, New Zealand. His research interests include oxidative stress and redox biology, plant-based foods and bioactive molecules, plant breeding and biotechnology, the cryopreservation of germplasm, and the stress biology of plants, animals, and algae. He has over 100 peer-reviewed publications and has edited 2 books for Springer and 1 for Elsevier.

Masayuki Fujita is a professor in the Department of Plant Science, Faculty of Agriculture, Kagawa University, Kagawa, Japan. He received his B.Sc. in chemistry from Shizuoka University, Shizuoka, and his M.Agr. and Ph.D. in plant biochemistry from Nagoya University, Nagoya, Japan. His research interests include physiological, biochemical, and molecular biological responses based on secondary metabolism in plants under biotic (pathogenic fungal infection) and abiotic (salinity, drought, extreme temperatures, and heavy metals) stresses; phytoalexin, cytochrome P450, glutathione S-transferase, and phytochelatin; and redox reaction and antioxidants. He has over 150 peer-reviewed publications and has edited 2 books.

Lam-Son  Phan  Tran is head of the Signaling Pathway Research Unit at RIKEN Center for Sustainable Resource Science, Japan. He obtained his M.Sc. in biotechnology in 1994 and Ph.D. in biological sciences in 1997 from Szent Istvan University, Hungary. After doing his postdoctoral research at the National Food Research Institute (1999–2000) and the Nara Institute of Science and Technology of Japan (2001), in October 2001, he joined the Japan International Research Center for Agricultural Sciences to work on the functional analyses of transcription factors and osmosensors in Arabidopsis plants under environmental stresses. In August 2007, he moved to the University of Missouri-Columbia, USA, as a senior research scientist to coordinate a research team working to discover soybean genes to be used for genetic engineering of drought-tolerant soybean plants. His current research interests are the elucidation of the roles of phytohormones and their interactions in abiotic stress responses, as well as translational genomics of legume crops with the aim to enhance crop productivity under adverse environmental conditions. He has published over 110 peer-reviewed papers with more than 80 research and 30 review articles and contributed 8 book chapters to various book editions published by Springer, Wiley-Blackwell, and the American Society of Agronomy, Crop Science Society of America, and Soil Science Society of America. He has also edited nine book volumes, including this one, for Springer and Elsevier.