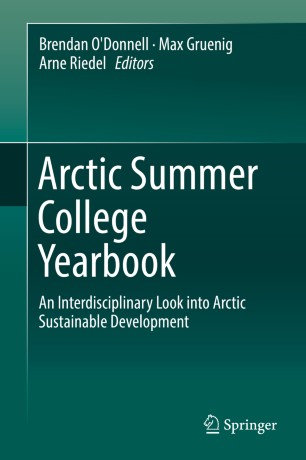 This book highlights both the diversity of perspectives and approaches to Arctic research and the inherent interdisciplinary nature of studying and understanding this incomparable region. The chapters are divided into four liberally-defined sections to provide space for dynamic interpretation and dialogue in search of sustainable solutions to the issues facing the Arctic. From governance to technology, scientific research to social systems, human health to economic development, the authors discuss fundamental questions while looking toward the Arctic’s future. Whether the reader is well-versed in the history and complexity of Arctic policy or looking for an insightful introduction to the vast world of Arctic research, everyone will find answers that lead to new questions and even more discoveries in these pages, laying the foundation for tomorrow’s discussion on the future of the Arctic.

The Arctic’s unique geographic and political characteristics pose questions for the international community, indigenous peoples, and economic interests not easily answered through traditional concepts. To that end, the Arctic Summer College has been engaging leading professionals, students, scholars, and policy makers from across the globe to exchange ideas and support further investigation into the Arctic. A joint venture between Ecologic Institute US and Ecologic Institute Berlin (Germany), the College participates at the annual Arctic Circle Assembly in Reykjavik, Iceland, and continues to be at the forefront of international collaboration in this critical area of economic, political, environmental, and humanitarian development.

Brendan O’Donnell is a research fellow and writer at Ecologic Institute in Washington, DC. His publications with the institute have included research on next generation sustainable finance, low-carbon energy security, urban sustainability, the German energy transition, citizen engagement, the urbanization of the Arctic, the impact of environmental regulations on international trade, and the role of art in the environmental discourse. Prior to joining Ecologic Institute in 2014, Brendan worked for more than a decade as a politics and features journalist, art editor, and writer for international educational media. His academic concentrations were comparative literature and philosophy. He has lived, studied, and worked in Berlin, Germany; Venice, Italy; and throughout the United States.

Max Gruenig is President of Ecologic Institute in Washington, DC, and has been with Ecologic Institute since 2007. His work focuses on sustainable development in the energy and transport sectors, as well as urban sustainability and resilient cities. Max has served as a director of the Arctic Summer College since 2015. He is a founding member of the European Institute for Sustainable Transport (EURIST), a sustainability advisory board member for German energy provider NaturEnergiePlus, and a member of the Consumer Research Network of the German Federal Ministry for Justice and Consumer Protection (BMJV). Max is a frequent speaker on sustainability issues, reaching audiences in North and South America, the Caribbean, Europe, Asia, and Africa. In 2004, Max completed his Diplom-Volkswirt (MA in economics) at Humboldt-Universität in Berlin, with a focus on natural resource economics and auction theory. He has lived and worked in Germany, Iceland, Japan, and the United States.

Arne Riedel is an environmental lawyer at Ecologic Institute in Berlin, where he coordinates the Institute’s activities on Arctic issues, serves as a director of the Arctic Summer College, and works on climate and energy laws and governance, including in collaboration with the German government, the European Union (EU), and the WWF International Arctic Programme. Arne’s publications include chapters on Arctic Marine Governance, information gaps between the EU and Arctic stakeholders, and regional environmental and energy governance. He supports the German Ministry of the Environment (BMUB) in the negotiations on the UNFCC and the Paris Agreement and provides legal expertise on renewable energies for the German Ministry for Economic Affairs and Energy (BMWi). Arne completed law school in 2007 at Freie Universität in Berlin, with a concentration on public law. He was awarded a Master of Laws (LLM) in European Law with distinction from the University of Nottingham (UK) in 2009.