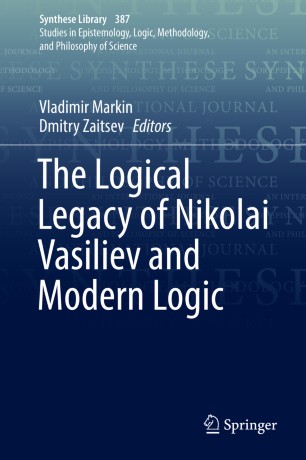 The Logical Legacy of Nikolai Vasiliev and Modern Logic

This volume offers a wide range of both reconstructions of Nikolai Vasiliev’s original logical ideas and their implementations in the modern logic and philosophy. A collection of works put together through the international workshop "Nikolai Vasiliev’s Logical Legacy and the Modern Logic," this book also covers foundations of logic in the light of Vasiliev’s contradictory ontology. Chapters range from a look at the Heuristic and Conceptual Background of Vasiliev's Imaginary Logic to Generalized Vasiliev-style Propositions. It includes works which cover Imaginary and Non-Aristotelian Logics, Inconsistent Set Theory and the Expansion of Mathematical Thinking, Plurivalent Logic, and the Impact of Vasiliev's Imaginary Logic on Epistemic Logic. The Russian logician, Vasiliev, was widely recognized as one of the forerunners of modern non-classical logic. His "imaginary logic" developed in some of his work at the beginning of 20th century is often considered to be one of the first systems of paraconsistent and multi-valued logic. The novelty of his logical project has opened up prospects for modern logic as well as for non-classical science in general. This volume contains a selection of papers written by modern specialists in the field and deals with various aspects of Vasiliev's logical ideas. The logical legacy of Nikolai Vasiliev can serve as a promising source for developing an impressive range of philosophical interpretations, as it marries promising technical innovations with challenging philosophical insights.

Vladimir I. Markin - Head of the Department of Logic, Lomonosov Moscow State University, Moscow, Doctor of Science, logician, philosopher. His research interests focus on Syllogistics, Modal Logic and Logic of Time. He is the co-author of two logic textbooks and three books on Syllogistic and automated PROOF-Search.