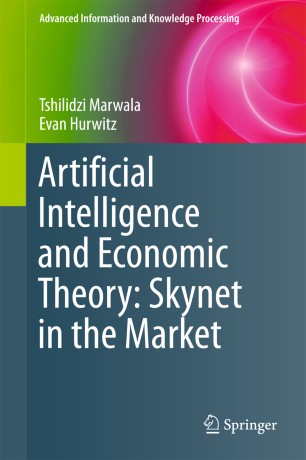 Artificial Intelligence and Economic Theory: Skynet in the Market

This book theoretically and practically updates major economic ideas such as demand and supply, rational choice and expectations, bounded rationality, behavioral economics, information asymmetry, pricing, efficient market hypothesis, game theory, mechanism design, portfolio theory, causality and financial engineering in the age of significant advances in man-machine systems. The advent of artificial intelligence has changed many disciplines such as engineering, social science and economics. Artificial intelligence is a computational technique which is inspired by natural intelligence concepts such as the swarming of birds, the working of the brain and the pathfinding of the ants.

Artificial Intelligence and Economic Theory: Skynet in the Market analyses the impact of artificial intelligence on economic theories, a subject that has not been studied. It also introduces new economic theories and these are rational counterfactuals and rational opportunity costs. These ideas are applied to diverse areas such as modelling of the stock market, credit scoring, HIV and interstate conflict. Artificial intelligence ideas used in this book include neural networks, particle swarm optimization, simulated annealing, fuzzy logic and genetic algorithms. It, furthermore, explores ideas in causality including Granger as well as the Pearl causality models.

Tshilidzi Marwala is the Vice-Chancellor and Principal of the University of Johannesburg. He was previously the Deputy Vice Chancellor: Research and Internationalization and a Dean of the Faculty of Engineering at the University of Johannesburg. He was previously a full Professor of Electrical Engineering, the Carl and Emily Fuchs Chair of Systems and Control Engineering as well as the SARChI chair of Systems Engineering at the University of the Witwatersrand. Prior to this, he was an executive assistant to the technical director at the South African Breweries. He holds a Bachelor of Science in Mechanical Engineering (magna cum laude) from Case Western Reserve University (USA), a Master of Mechanical Engineering from the University of Pretoria, a PhD in Engineering from Cambridge University and was a post-doctoral research associate at the Imperial College (London). He is a registered professional engineer, a Fellow of TWAS, the World Academy of Sciences, the Academy of Science of South Africa (ASSAf), the African Academy of Sciences and the South African Academy of Engineering. He is a Senior Member of the IEEE (Institute of Electrical and Electronics Engineering) and a distinguished member of the ACM (Association for Computing Machinery). His research interests are multi-disciplinary and they include the theory and application of computational intelligence to engineering, computer science, finance, social science and medicine. He has supervised 47 Masters and 21 PhD students to completion. He has published 9 books (one translated into Mandarin), over 280 papers and holds three international patents. He is an associate editor of the International Journal of Systems Science (Taylor and Francis Publishers).
Evan Hurwitz is a South African computer scientist. He obtained his BSc Engineering (Electrical) (2004), his MSc Engineering (2006) from the University of the Witwatersrand and PhD from the University of Johannesburg in
2014 supervized by Tshilidzi Marwala. He is known for his work on teaching a computer how to bluff which was widely covered by the magazine New Scientist. Hurwitz together with Tshilidzi Marwala proposed that there is less level of information asymmetry between two artificial intelligent agents than between two human agents and that the more artificial intelligent there is in the market the less is the volume of trades in the market.