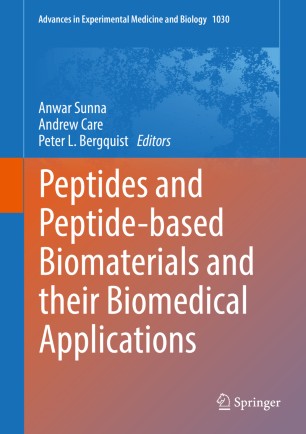 Peptides and Peptide-based Biomaterials and their Biomedical Applications

Part of the Advances in Experimental Medicine and Biology book series (AEMB, volume 1030)

This edited volume is composed of chapters written by experts in the field describing fundamental research on small peptide fragments in relation to their biological action and potential roles in biomedical applications from diagnosis to implant protection. It provides a review of the wide scope and significance of these relatively simple arrays of amino acids that have the ability to bind to surfaces of all kinds and can facilitate the autonomous assembly of structures in nanotechnology as well as penetrating cell membranes and delivering therapeutic drugs. Readers will learn of some of the impediments to a wider and more comprehensive catalog of these molecules and of some of the attributes of rationally-designed and chemically synthesised peptides as anticancer agents.

An overview is provided of the expansive variety of biological leads for biomedically relevant peptides as well as the wide array of tissues and biological, bioactive scaffolds that are dependent on these short peptide sequences addressing topics such as cartilage and hard tissue initiation and regeneration and the transition of active reagents from molluscs to drug leads for the treatment of chronic pain. Peptides can possess surface-specific non-covalent adsorption properties that can be exploited to enhance the functionality of medical implant materials but their implementation is largely on a trial-and-error basis because an understanding of general structure/function relationships is lacking. Molecular simulation approaches can provide relevant details at the atomic scale and prospects for advancing peptide-mediated medical implant surface treatments via molecular simulation are summarized. The literature has papers emphasizing the role of peptides in the design of biohybrid functional surfaces and there has been a growing interest in applying peptides as materials-selective assemblers and self-organizers, but applications are based largely on an empirical understanding of solid surface binding characteristics, as reviewed here.

The present work is written for researchers who may be considering entering this field and are exposed to a mass of fundamental research information on individual applications.  It has been our intention to trace how and where the research has emerged and to outline the opportunities we see to develop novel and well-grounded tools for specific therapeutic scenarios.

Anwar Sunna is an Associate Professor in the Department of Chemistry and Biomolecular Sciences at Macquarie University (MQ), Sydney, Australia. He obtained a PhD from the Hamburg University of Technology in Germany. He was manager of the Environmental Biotechnology Co-operative Research Centre at MQ and later was the recipient of the prestigious Vice-Chancellor's Innovation Fellowship. His recent research has been on the interaction between biomolecules and inorganic compounds including new synthetic peptide linkers with applications in the functionalisation of nanoparticles, bioimaging and cancer therapy. Anwar is a member of the MQ Biomolecular Discovery and Design Research Centre, MQ Biosecurity Futures Research Centre, Australian Research Council (ARC) Training Centre for Molecular Technology in the Food Industry and the ARC Centre of Excellence for Nanoscale BioPhotonics. He is also one of the directors of Synthetic Biology Australasia.
Andrew Care is a Research Fellow in the ARC Centre of Excellence for Nanoscale BioPhotonics, a transdisciplinary research centre that aims to develop innovative nanotechnologies to investigate complex living systems. He obtained his PhD from Macquarie University (MQ) in Sydney, Australia. Andrew is also a member of both the MQ Biomolecular Discovery and Design Research Centre and the MQ BioFocus Research Centre. His current research is focused on the development of engineered biomolecules, including solid-binding peptides, to control the self-assembly and biofunctionalisation of materials and biomolecules in a range of biomedical and biotechnological applications.
Peter Bergquist is Emeritus Professor in the Biomolecular Discovery and Design Research Centre at Macquarie University and Emeritus Professor in the Department of Molecular Medicine & Pathology at The University of Auckland Medical School. He has a PhD and DSc from the University of Auckland in New Zealand and has been a Postdoctoral Fellow and Research Fellow at Harvard Medical School, Yale and Oxford Universities and a Visiting Fellow at New York University School of Medicine. His recent publications reflect research performed with the Environmental Biotechnology Co-operative Research Centre in Australia and he developed research expertise in gas phase catalysis and biofunctionalisation of inorganic matrices containing silica. He has been on the editorial boards of several significant journals such as Applied and Environmental Microbiology and Journal of Bacteriology.