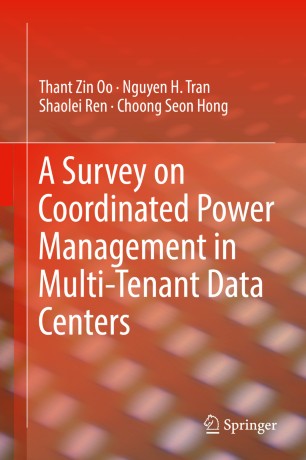 A Survey on Coordinated Power Management in Multi-Tenant Data Centers

This book investigates the coordinated power management of multi-tenant data centers that account for a large portion of the data center industry. The authors include discussion of their quick growth and their electricity consumption, which has huge economic and environmental impacts. This book covers the various coordinated management solutions in the existing literature focusing on efficiency, sustainability, and demand response aspects. First, the authors provide a background on the multi-tenant data center covering the stake holders, components, power infrastructure, and energy usage. Then, each power management mechanism is described in terms of motivation, problem formulation, challenges and solution.

Thant Zin Oo received the B.Eng. degree in electrical systems and electronics at Myanmar Maritime University, Thanlyin, Myanmar in 2008 and the B.S. degree in computing and information system from London Metropolitan University, U.K., in 2008, for which he received grant from the British Council. He is currently working towards Ph.D. degree in computer science and engineering from Kyung Hee University, Korea, for which he was awarded a scholarship in 2010. His research interests include wireless communications, network virtualization, data centers, and sustainable energy.

Nguyen H. Tran received the BS degree from Hochiminh City University of Technology and Ph.D. degree from Kyung Hee University, in electrical and computer engineering, in 2005 and 2011, respectively. Since 2012, he has been an Assistant Professor with Department of Computer Science and Engineering, Kyung Hee University. His research interest is to applying analytic techniques of optimization, game theory, and stochastic modeling to cutting-edge applications such as cloud and mobile-edge computing, data centers, heterogeneous wireless networks, and big data for networks. He received the best KHU thesis award in engineering in 2011 and best paper award at IEEE ICC 2016. He is the Editor of IEEE Transactions on Green Communications and Networking.

Shaolei Ren is an Assistant Professor of Electrical and Computer Engineering at University of California, Riverside. He received his B.E. from Tsinghua University in 2006, M.Phil. from Hong Kong University of Science and Technology in 2008, and Ph.D. from University of California, Los Angeles in 2012, all in electrical and computer engineering. His research interests include cloud computing, data centers, and network economics. He was a recipient of the U.S. NSF Faculty Early Career Development (CAREER) Award in 2015. He also received best paper awards from several conferences, including ACM e-Energy'16, IEEE ICC'16 and IEEE ICC'09.

Choong Seon Hong received the B.S. and M.S. degrees in electronic engineering from Kyung Hee University, Seoul, South Korea, in 1983 and 1985, respectively, and the Ph.D. degree from Keio University, Minato, Japan, in 1997. In 1988, he joined Korea Telecom, where he worked on broadband networks as a Member of Technical Staff. In September 1993, he joined Keio University. He worked for the Telecommunications Network Laboratory, Korea Telecom, as a Senior Member of Technical Staff and the Director of the Networking Research Team until August 1999. Since September 1999, he has been a Professor with the Department of Computer Science and Engineering, Kyung Hee University. His research interests include future Internet, ad hoc networks, network management, and network security. He is a member of ACM, IEICE, IPSJ, KIISE, KICS, KIPS, and OSIA. He has served as the General Chair, a TPC Chair/Member, or an Organizing Committee Member for international conferences such as NOMS, IM, APNOMS, E2EMON, CCNC, ADSN, ICPP, DIM, WISA, BcN, TINA, SAINT, and ICOIN. In addition, he is currently an Associate Editor of the IEEE Transactions on Network and Service Management, International Journal of Network Management, and Journal of Communications and Networks and an Associate Technical Editor of the IEEE Communications Magazine.