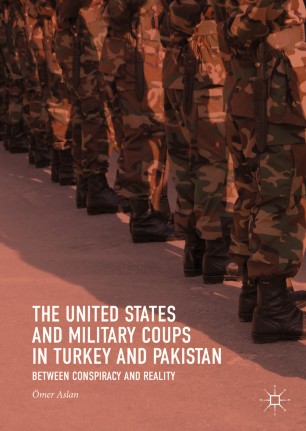 The United States and Military Coups in Turkey and Pakistan

Between Conspiracy and Reality

This comparative study explores the involvement of the United States in four successful military coups in Turkey and Pakistan during the Cold War. Focusing on military-to-military relations with the US in each country, the book offers insight into how external actors can impact the outcomes of coups, particularly through socialization via military training, education, and international organizations such as NATO. Drawing upon recently declassified government documents and a trove of unexplored interviews with high-ranking officials, Ömer Aslan also examines how coup plotters in both countries approached the issue of US reaction before, during, and after their coups. As armed forces have continued to make and unmake Turkish and Pakistani governments well into the twenty-first century, this volume offers original, probing analysis of the circumstances which make coups possible.

“In this book, Ömer Aslan sheds new light on the crucial role that external actors can play in fostering military coups. While acknowledging the central role of domestic factors, Aslan offers new theoretical insights and a wealth of original empirical evidence to show how the United State provided supportive signals and crucial material assistance in ways that bolstered military actors before, during and after they seized power in Turkey and Pakistan.” (Oisín Tansey, Senior Lecturer in International Relations, King’s College London, UK)

“This is an analytically probing study of the American role in military interventions in Turkey and Pakistan since the late fifties. Balanced in its assessments of the internal and external factors that led to military takeovers in the two countries, the book makes a persuasive case for keeping a clear distinction between conspiratorial assessments of external factors and the relative autonomy of coup makers in determining the timing, method and duration of their seizure of state power. Nuanced and accessible, this is a welcome addition to the comparative literature on the difficult transition from military authoritarianism to democratic consolidation.” (Ayesha Jalal, Mary Richardson Professor of History, Tufts University, USA)

“Ömer Aslan makes a convincing case that although the U.S. did not instigate past military coups d’état in Turkey and Pakistan, its half-hearted messaging beforehand and lack of unequivocal opposition afterwards had a big impact on how plotters calculated their chances. Through strong theoretical grounding and impressively careful combing of available sources, he provides a nuanced account of great value to anyone working in this field.” (Yezid Sayigh, Senior Fellow, Carnegie Middle East Center, Lebanon)