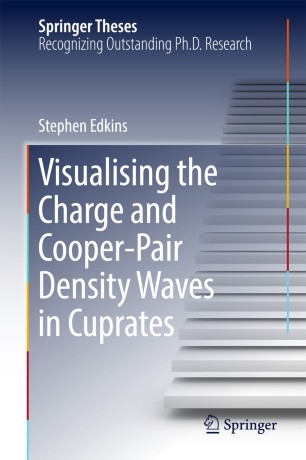 Visualising the Charge and Cooper-Pair Density Waves in Cuprates

This thesis reports on the use of scanning tunnelling microscopy to elucidate the atomic-scale electronic structure of a charge density wave, revealing that it has a d-symmetry form factor, hitherto unobserved in nature. It then details the development of an entirely new class of scanned probe: the scanning Josephson tunnelling microscope. This scans the Josephson junction formed between a cuprate superconducting microscope tip and the surface of a cuprate sample, thereby imaging the superfluid density of the sample with nanometer resolution. This novel method is used to establish the existence of a spatially modulated superconducting condensate, something postulated theoretically over half a century ago but never previously observed.

Stephen Edkins graduated from Churchill College, University of Cambridge in 2012 with a degree in Natural Sciences. He then went on to complete a PhD in physics at the University of St. Andrews in 2016. Much of his doctoral research was completed at Cornell University in the group of Séamus Davis where he continued to perform postdoctoral research. Stephen is now the Karel Urbanek Postdoctoral Fellow in the Department of Applied Physics at Stanford University