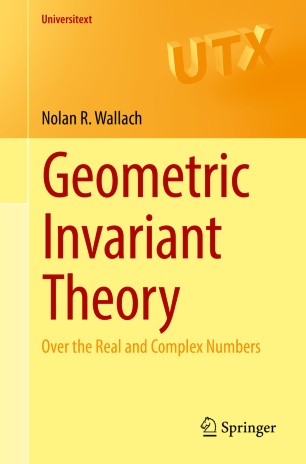 Over the Real and Complex Numbers

Geometric Invariant Theory (GIT) is developed in this text within the context of algebraic geometry over the real and complex numbers. This sophisticated topic is elegantly presented with enough background theory included to make the text accessible to advanced graduate students in mathematics and physics with diverse backgrounds in algebraic and differential geometry.  Throughout the book, examples are emphasized. Exercises add to the reader’s understanding of the material; most are enhanced with hints.

The exposition is divided into two parts. The first part, ‘Background Theory’, is organized as a reference for the rest of the book. It contains two chapters developing material in complex and real algebraic geometry and algebraic groups that are difficult to find in the literature. Chapter 1 emphasizes the relationship between the Zariski topology and the canonical Hausdorff topology of an algebraic variety over the complex numbers. Chapter 2 develops the interaction between Lie groups and algebraic groups. Part 2, ‘Geometric Invariant Theory’ consists of three chapters (3–5). Chapter 3 centers on the Hilbert–Mumford theorem and contains a complete development of the Kempf–Ness theorem and Vindberg’s theory. Chapter 4 studies the orbit structure of a reductive algebraic group on a projective variety emphasizing Kostant’s theory. The final chapter studies the extension of classical invariant theory to products of classical groups emphasizing recent applications of the theory to physics.