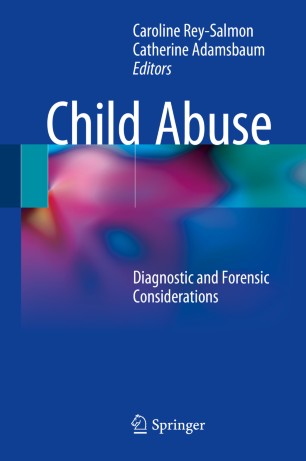 This book offers an interdisciplinary approach to child abuse providing a comprehensive overview of the topic. From fetal life to adolescence, various patterns of child abuse are described in 23 chapters with highlight on early diagnostic features and differential diagnoses. Data on psychological and domestic violence is also presented. Readers will improve their knowledge in the field of child abuse, helping to identify such situations at onset and subsequently prevent recurrences.

This volume outlines and summarizes the main different judicial processes for child abuse around the world. The book also provides the unique angle and information from experts in France, who unlike other countries, are fully independent of all other parties i.e. judges, prosecutors and families, thus having a unique insight to the origin and context of the violence. Insight to their approach can lead to better prevention of abuse around the world.

Written by a panel of authors including paediatricians, radiologists, forensic scientists, a judge, a magistrate and a psychologist, this book is of interest to professionals involved in pediatrics healthcare, students, medical doctors or nurses. Beyond the field of health, the book may also concern professionals of social and judicial areas who deal with child abuse.

Doctor Caroline Rey-Salmon is a pediatrician and forensic scientist whose research especially focuses on child abuse, sexual and domestic violence. Having completed her degree in medicine at Paris 7 University in 1985, she is currently responsible for the forensic unit at Hôtel Dieu hospital, Assistance Publique de Paris (APHP). Further, Dr. Rey-Salmon is president of the “Center of Victimology for minors” a French association that promotes both the training of professionals and prevention of abuse in collaboration with judicial professionals, for more than 20 years.

Professor Catherine Adamsbaum is a pediatric radiologist and has been involved in the investigation of child abuse for more than 20 years. She received her degree in medicine from Paris 6 University in 1984. She served as General Secretary and later as President of the French Society of Pediatric Imaging (2003-2011). She currently chairs the department of pediatric radiology of Bicêtre Hospital, Assistance Publique de Paris (APHP) and is affiliated with Paris Sud University. In addition, Dr Adamsbaum has co-chaired the taskforce on abuse of the European Society of Pediatric Radiology (ESPR) and she is currently Director of the National French Diploma program for child abuse.

Both authors are certified experts for the Court of Paris and the Supreme Court. They have developed valuable collaborations with other experts throughout the world in the field of child abuse. They authored a French-language book on child abuse in 2013 (Lavoisier Ed) that has since been awarded by the Prix Prescrire and is commonly used to train not only doctors, nurses and medical students, but also judges and prosecutors (Ecole de la Magistrature).

Working in collaboration with the National American Center on Shaken Baby Syndrome (NCSBS), they also co-organized the first international conference in Paris on shaken baby syndrome (2014).

“This is an interesting book that covers all the clin­ical aspects of child abuse, as well as some historical and legal aspects. … Each chapter is well written, easy to read and the chapters are laid out in a similar format, providing a good overview of the sub­ject that is relatively easy to access.” (Karl Johnson, RAD Magazine, November, 2018)
“This book is intended to educate anyone, including students and providers, about aspects of child abuse and neglect. … this thoughtful, well presented book is worthwhile for clinical providers who are interested in learning about child abuse and neglect. The organization, presentation, photos and illustrations, and key points are well done. This book is worthwhile for people learning about child abuse and neglect … .” (Joseph Hageman, Doody's Book Reviews, August, 2018)
Buy options