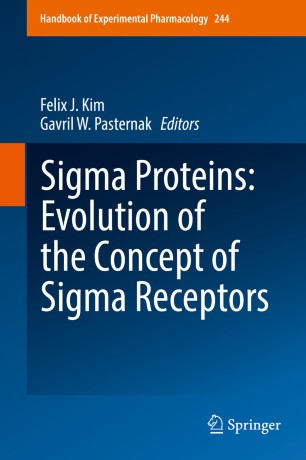 Sigma Proteins: Evolution of the Concept of Sigma Receptors

Two sigma receptor subtypes have been proposed, sigma1 and 2. Much of our understanding of this system is based on biochemical and pharmacological characterization of the cloned sigma1 receptor subtype (Sigma1). It has become clear that sigma receptors are not canonical receptors. Sigma1 is highly conserved among mammalian species, however, it does not share significant homology with any other mammalian protein. Although a range of structurally diverse small molecules bind Sigma1 with high affinity, and it has been associated with a broad range of signaling systems, Sigma1 itself has no known signaling or enzymatic activity. The evolution of this field over nearly four decades has more recently led to a fundamental shift in the concept of “sigma receptors” to what may more accurately and generally be called sigma proteins. Largely based on traditional pharmacologic approaches, the Sigma1 protein has been associated with a broad range of signaling systems, including G-protein coupled receptors, NMDA receptors, and ion channels. Sigma proteins have been linked to a range of physiological processes, including intracellular calcium signaling, neuroprotection, learning, memory, and cognition. Emerging genetic, clinical, and mechanism focused molecular pharmacology data demonstrate the involvement of proteins in a range of pathophysiologies and disorders including neurodegenerative disease, pain, addiction, psychomotor stimulant abuse, and cancer. However, an understanding of the physiological role of sigma proteins has remained elusive. Emerging data associate Sigma1 with chaperone-like activities or molecular scaffold functions. This book aims to provide an updated perspective on this rapidly evolving field undergoing changes in fundamental concepts of key importance to the discipline of pharmacology. It focusses on the reported roles of sigma proteins in pathophysiology and on emergent therapeutic initiatives.