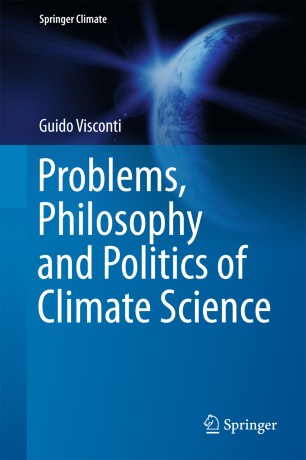 This book is a critical appraisal of the status of the so-called Climate Sciences (CS). These are contributed by many other basic sciences like physics, geology, chemistry and as such employ theoretical and experimental methods. In the last few decades most of the CS have been identified with the global warming problem and numerical models have been used as the main tool for their investigations. The produced predictions can only be partially tested against experimental data and may represent one of the reasons CS are drifting away from the route of the scientific method. On the other hand the study of climate faces many other interesting and mostly unsolved problems (think about ice ages) whose solution could clarify how the climatic system works. As for the global warming, while its existence is largely proved, scientifically it can be solved only with a large experimental effort carried out for a few decades. Problems can arise when not proved hypotheses are adopted as the basis for public policy without the recognition that they may be on shaky ground. The strong interactions of the Global Warming (GW) with the society create another huge problem of political nature for the CS.
The book argues that the knowledge gained so far on the specific GW problem is enough for the relevant political decisions to be taken and that Climate Science should resume the study of the climate system with appropriate means and methods. The book introduces the most relevant concepts needed for the discussion in the text or in appropriate appendices and it is directed to the general public with upper undergraduate background. Each chapter closes with a debate between a climate scientist and a humanist to reflect the discussions between climate science and philosophy or climate scientists and society.

Guido Visconti is Professor Emeritus at Università dell'Aquila, Italy and a member of the National Academy of Lincei. He has held a Fulbright Fellowship (1968-69), University of Maryland (USA). NATO Fellowship, Dept of Meteorology, MIT, USA, (1976, 1977). NATO Senior Fellowship, NCAR, USA (1986 -1987). He has served as committee member of the Intergovernmental Panel for Climatic Change (IPCC) and Member of the International Ozone Commission (WMO). In his long career he was the Principal Investigator UARS Correlative Measurements Program (NASA) and Atmospheric Effects of Supersonic Airplane (AESA,NASA). He was the author of the book Fundamentals of Physics and Chemistry of the Atmosphere, Second Edition, Springer , 2016.