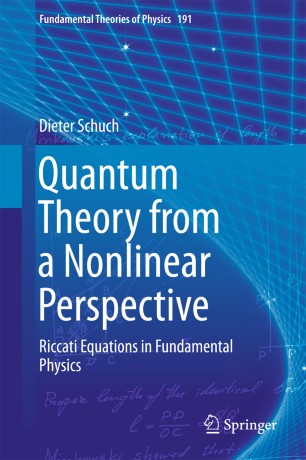 Quantum Theory from a Nonlinear Perspective

This book provides a unique survey displaying the power of Riccati equations to describe reversible and irreversible  processes in physics and, in particular, quantum physics. Quantum mechanics is supposedly linear, invariant under time-reversal, conserving energy and, in contrast to classical theories, essentially based on the use of complex quantities. However, on a macroscopic level, processes apparently obey nonlinear irreversible evolution equations and dissipate energy. The Riccati equation, a nonlinear equation that can be linearized, has the potential to link these two worlds when applied to complex quantities. The nonlinearity can provide information about the phase-amplitude correlations of the complex quantities that cannot be obtained from the linearized form. As revealed in this wide ranging treatment, Riccati equations can also be found in many diverse fields of physics from Bose-Einstein-condensates to cosmology. The book will appeal to graduate students and theoretical physicists interested in a consistent mathematical description of physical laws.