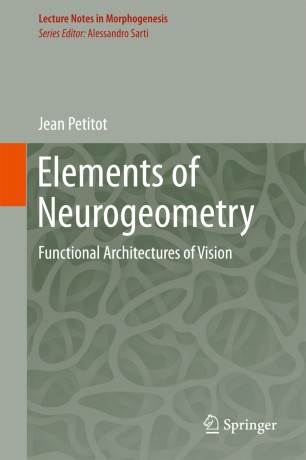 This book describes several mathematical models of the primary visual cortex, referring them to a vast ensemble of experimental data and putting forward an original geometrical model for its functional architecture, that is, the highly specific organization of its neural connections. The book spells out the geometrical algorithms implemented by this functional architecture, or put another way, the “neurogeometry” immanent in visual perception. Focusing on the neural origins of our spatial representations, it demonstrates three things: firstly, the way the visual neurons filter the optical signal is closely related to a wavelet analysis; secondly, the contact structure of the 1-jets of the curves in the plane (the retinal plane here) is implemented by the cortical functional architecture; and lastly, the visual algorithms for integrating contours from what may be rather incomplete sensory data can be modelled by the sub-Riemannian geometry associated with this contact structure.

As such, it provides readers with the first systematic interpretation of a number of important neurophysiological observations in a well-defined mathematical framework. The book’s neuromathematical exploration appeals to graduate students and researchers in integrative-functional-cognitive neuroscience with a good mathematical background, as well as those in applied mathematics with an interest in neurophysiology.

Jean Petitot specializes in mathematical modeling in  the cognitive sciences. Former student and teacher at the École Polytechnique, he is currently Professor at the Mathematics Center of the École des Hautes Études en Sciences Sociales in Paris. He is a member of the International Academy of Philosophy of Science.  Having worked for several years on the theory of singularities in differential geometry, he was one of the first to become interested in René Thom's morphodynamic models of visual perception  and phonetics in the 1970s.