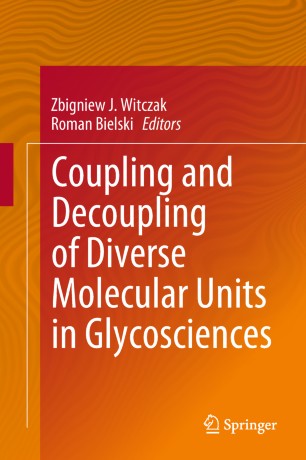 Coupling and Decoupling of Diverse Molecular Units in Glycosciences

This unique book covers the latest developments in coupling and decoupling of biomolecules containing functionalized carbohydrate components, being one of the first collections in this important area of applied medicinal chemistry.

Connecting molecules, often referred as bio-conjugation, has become one of the most often performed procedures in modern medicinal chemistry. Sometimes, when the connected molecules are not useful anymore, they must be disconnected. The molecules that must be connected (coupled) may belong to both small and large molecules and include such constructs as glycoproteins, glycopeptides and glycans.

In this work, more than 15 experts address a comprehensive range of potential and current uses of in vitro and in vivo bio-conjugation methodologies, leading to a variety of glycoconjugates. The analytical aspects of bio-conjugation are also here discussed. Medicinal and organic chemists from graduate level onwards will understand the appeal of this important book.

Zbigniew J. Witczak obtained his Ph.D. from Medical University of Lodz, Faculty of Pharmacy. Lodz, Poland. After a postdoctoral work with Roy L. Whistler at Purdue University he briefly worked in industry (A. E. Staley), and joined in 1990 the Faculty of the School of Pharmacy at the University of Connecticut. He moved to Wilkes University, Nesbitt School of Pharmacy in 2000, where he is a Full Professor. He has published over hundred research papers and book chapters, edited eight books and holds six patents in the fields of carbohydrate medicinal and biological chemistry. In 1997 he was awarded with the John S. Burlew Award from the ACS Connecticut Valley Section. In 2000, he was awarded with the Melville L. Wolfrom Award from the ACS Division of Carbohydrate Chemistry for his outstanding research contribution to carbohydrate chemistry and service to the division. His research interests are in the area of thio sugars and carbohydrate synthons including Levoglucosenone and L-Arabinose as template for carbohydrate based therapeutics. He is a member of several editorial boards of renowned chemical and pharmaceutical journals. In 2011, he was selected as one of the 2011 ACS Fellows. He is the US Representative to the International Carbohydrate Organization and was elected ICO President for the 2016-2018 term.

Roman Bielski’s expertise includes the total synthesis of carbohydrates and pheromones, formation of micro and nanocapsules, synthesis of polymers and radio-labeled compounds, ultra-sensitive measurements in biological fluids and petroleum products. Dr. Bielski holds a Masters degree in chemical engineering and a Ph.D. in organic chemistry (with O. Achmatowicz of the Achmatowicz reaction). He was a post-doctoral fellow at Imperial College with the Nobel laureate Sir Derek Barton. He worked in academia at the Warsaw Agricultural University, Cornell University and Lehigh University, and co-founded several small companies (Petramec, Petrotraces, Attochrom/Biotraces, BioSynthon). At present, he is a CTO in Value Recovery, one of partners in Chemventive, LLC and adjunct at Wilkes University. He is a past chairman of the Chemical Consultants Network. Dr. Bielski (with M. Tencer) has discovered a novel chiral influence and developed a method to resolve racemates without using chiral compounds (absolute enantioselective separation {AES}). The concept offers a hypothesis explaining the origin of homochirality and answering why ribose is a sugar component of nucleic acids. He is a co-author of four dozen publications, over twenty patents, multiple award winner of open innovation challenges through Innocentive and Nine Sigma, and co-editor of 3 books.