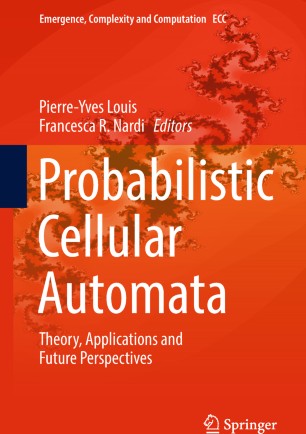 This book explores Probabilistic Cellular Automata (PCA) from the perspectives of statistical mechanics, probability theory, computational biology and computer science. PCA are extensions of the well-known Cellular Automata models of complex systems, characterized by random updating rules. Thanks to their probabilistic component, PCA offer flexible computing tools for complex numerical constructions, and realistic simulation tools for phenomena driven by interactions among a large number of neighboring structures. PCA are currently being used in various fields, ranging from pure probability to the social sciences and including a wealth of scientific and technological applications. This situation has produced a highly diversified pool of theoreticians, developers and practitioners whose interaction is highly desirable but can be hampered by differences in jargon and focus. This book – just as the workshop on which it is based – is an attempt to overcome these difference and foster interest among newcomers and interaction between practitioners from different fields. It is not intended as a treatise, but rather as a gentle introduction to the role and relevance of PCA technology, illustrated with a number of applications in probability, statistical mechanics, computer science, the natural sciences and dynamical systems. As such, it will be of interest to students and non-specialists looking to enter the field and to explore its challenges and open issues.

Pierre-Yves Louis is an associate professor at the 'Laboratoire de Mathématiques et Applications' (University of Poitiers and CNRS, UMR 7348, France), where he teaches applied probability, statistics and stochastic modeling. His research interests include interacting systems of stochastic processes and algorithms, and stochastic models from mathematical, statistical, computational and applied perspectives (in particular in biology and medicine). He holds a PhD in mathematics from Université Lille 1 (France) and Politecnico di Milano (Italy), and his dissertation focused on a study of probabilistic cellular automata from a stochastic processes and statistical mechanics viewpoint. He previously served as an assistant at the University of Potsdam and post-doc fellow at the TU Berlin (Germany). He was trained both in pure mathematics and physics at the University Lille 1. While he was visiting scholar at Eurandom (TU Eindhoven and CNRS-UMI 3022), he was main organizer of a workshop dedicated to PCA. P.-Y. Louis is a regularly invited researcher in the Netherlands, Germany and Italy, where he maintains several ongoing research collaborations. He supervises master students and PhD candidates.

Francesca R. Nardi is an associate professor at the University of Florence’s Department of Mathematics and Computer Science since 2016. Previously, she had a tenure track position (2006-2016) in the Stochastics Section of the Department of Mathematics and Computer Science at Eindhoven University of Technology (the Netherlands). She received her MSc degree (1995) and PhD degree (2001) in mathematics from the University of Rome "Tor Vergata", Italy, and subsequently held post-doc and teaching positions at Eurandom (Eindhoven University of Technology, 2000–2003), the University of Rome "La Sapienza" (2003–2005), and the University of Rome "Roma tre" (2005–2006). Her main research interests are in probability theory, statistical mechanics, and mathematical physics. Applications that motivate her research are statistical physics of equilibrium: phase diagrams and phase transitions; the statistical physics of non-equilibrium: meta-stability; the spread of epidemics over networks for moving populations; random walks in random environments; cut-off phenomena and random graphs. Francesca was the recipient (as PI) of a STAR grant (2011) and an Aspasia grant (2011) from the Netherlands Organization for Scientific Research (NWO). Francesca is regularly visiting The Netherlands where she has several ongoing projects and research collaboration.  Francesca has more than 15 years experience teaching courses in basic probability, stochastic processes, large deviations , metastability and random graphs. She supervised and coached master students, PhD students and post docs.