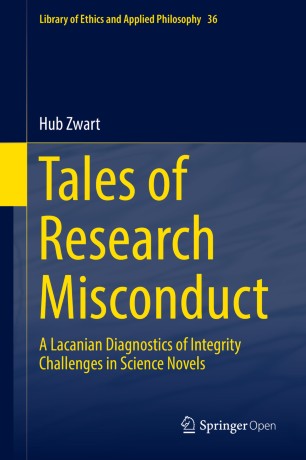 A Lacanian Diagnostics of Integrity Challenges in Science Novels

Part of the Library of Ethics and Applied Philosophy book series (LOET, volume 36)

This monograph contributes to the scientific misconduct debate from an oblique perspective, by analysing seven  novels devoted to this issue, namely: Arrowsmith by Sinclair Lewis (1925), The affair by C.P. Snow (1960), Cantor’s Dilemma by Carl Djerassi (1989), Perlmann’s Silence by Pascal Mercier (1995), Intuition by Allegra Goodman (2006),  Solar by Ian McEwan (2010) and Derailment by Diederik Stapel (2012). Scientific misconduct, i.e. fabrication, falsification, plagiarism, but also other questionable research practices, have become a  focus of concern for academic communities worldwide, but also for managers, funders and publishers of research. The aforementioned novels offer intriguing windows into integrity challenges emerging in contemporary research practices. They are analysed from a continental philosophical perspective,  providing a stage where various voices, positions and modes of discourse are mutually exposed to one another, so that they critically address and question one another. They force us to start from the admission that we do not really know what misconduct is. Subsequently, by providing case histories of misconduct, they address integrity challenges not only in terms of individual deviance but also in terms of systemic crisis, due to current transformations in the ways in which knowledge is produced. Rather than functioning as moral vignettes, the author argues that misconduct novels challenge us to reconsider some of the basic conceptual building blocks of integrity discourse.

Hub Zwart (1960) studied Philosophy and Psychology at Radboud University Nijmegen and became research associate at the Institute for Bioethics in Maastricht in 1988. In 2000 he was appointed as full Professor of Philosophy at the Faculty of Science (RU Nijmegen). In 2003 he established and became scientific director of the Centre for Society and Genomics (CSG) and in 2005 he established and became director of the Institute for Science, Innovation, and Society (ISIS).  His research addresses philosophical and societal dimensions of the life sciences, notably genomics and post-genomics (synthetic biology, nanomedicine and brain research) from a continental philosophical perspective, building on traditions such as dialectics (Hegel), phenomenology (Heidegger), psychoanalysis (Bachelard, Lacan) and critical theory (Foucault). Special attention is^100 single or first author articles in academic journals / volumes and 12 books, including Understa

150 international lectures, most of them invited. He was visiting scholar / professor at the Hastings Centre (NY), St. John’s (Canada), Nagasaki (Japan), Seoul (Korea) and Ghent (Belgium). With Ruth Chadwick, he is editor-in-chief of the open access journal Life Sciences, Society and Policy (Springer). He is / was involved in several international research projects and advisory boards and since 2015 he is coordinator of the H2020 project PRINTEGER (Promoting Integrity as an Integral Dimension of Excellence in Research).