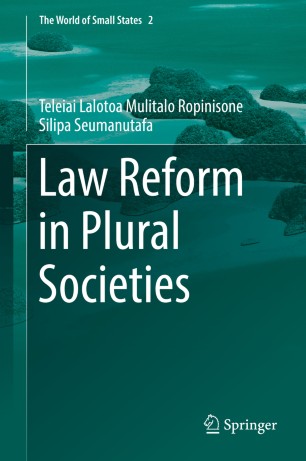 Part of the The World of Small States book series (WSS, volume 2)

This book asserts that the Pacific Islands continue to struggle with the colonial legacy of plural legal systems, comprising  laws and legal institutions from both the common law and the customary legal system. It also investigates the extent to which customary principles and values are accommodated in legislation. Focusing on Samoa, the author argues that South Pacific countries continue to adopt a Western approach to law reform without considering legal pluralism, which often results in laws which are unsuitable and irrelevant to Samoa. In the context of this system of law making, effective law reform in Samoa can only be achieved where the law reform process recognises the legitimacy of the two primary legal systems.  The book goes on to present a law reform process that is more relevant and suitable for law making in the Pacific Islands or any post-colonial societies.