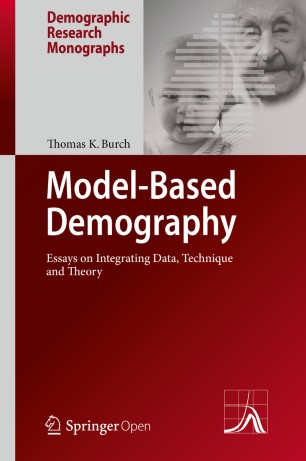 Late in a career of more than sixty years, Thomas Burch, an internationally known social demographer, undertook a wide-ranging methodological critique of demography. This open access volume contains  a selection of resulting papers, some previously unpublished, some published but not readily accessible [from past meetings of The International Union for the Scientific Study of Population and its research committees, or from other small conferences and seminars]. Rejecting the idea that demography is simply a branch of applied statistics, his work views it as an autonomous and complete scientific discipline. When viewed from the perspective of modern philosophy of science, specifically the semantic or model-based school, demography is a balanced discipline, with a rich body of techniques and data, but also with more and better theories than generally recognized. As demonstrated in this book, some demographic techniques can also be seen as theoretical

models, and some substantive/behavioral models, commonly rejected as theory because of inconsistent observations, are now seen as valuable theoretical models, for example demographic transition theory.  This book shows how demography can build a strong theoretical edifice on its broad and deep empirical foundation by adoption of the model-based approach to science. But the full-fruits of this approach will require demographers to make greater use of computer modeling [both macro- and micro-simulation], in the statement and manipulation of theoretical ideas, as well as for numerical computation.

This book is open access under a CC BY license.

Research, Princeton University, Thomas Burch taught at Marquette, and at Georgetown University, where he helped found the Center for Population Research. From 1970 to 1975 he served in the Demographic Division [Associated Director] of The Population Council. He then joined the University of Western Ontario to help develop a new Ph.D. program in social demography. He was elected President of the Canadian Population Society in 1992-94, and received that organization’s Lifetime Achievement Award in 2013. Currently he is Adjunct Professor at the University of Victoria and Research Affiliate of the Centre for Studies in Demography and Ecology, University of Washington. His main research interests have been fertility, marriage and divorce, household and family structure, and kinship. He has had an abiding interest in demographic theory, and concern over the relative neglect of the

ory by the discipline. In the 1990’s, he began to develop a new vision for the codification, presentation, and future development of demography, based on the ‘semantic’ or ‘model-based’ approach to the philosophy of science.  In this view of demography, technique, empirical research and theory are in better balance. And demography is seen to have more good theory than is generally realized.

“Tom Burch’s monograph can be viewed as a summary of the thoughts that he has assembled on population theory after many years of careful consideration, and he ties them not only to theory but to modelling and explanation, as well as to teaching. This monograph is an important, seminal contribution to the field of demography that is extremely well-written and organized.” (Samuel H. Preston, Canadian Studies in Population, Vol. 45 (3-4), 2018)
“The book is a reflection on how to strengthen demography as a discipline and bridge the divide between formal and substantive or social demography. The book is highly recommended to anyone interested in the future of our discipline. Burch’s message is of particular interest to junior demographers who wish to identify niches where innovation is needed most to develop demography into a complete science with a sound and coherent theory, a set of techniques, and data.” (Frans Willekens, European Journal of Population, Vol. 34, 2018)
PDF
EPUB