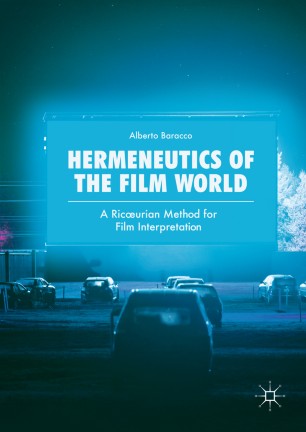 Hermeneutics of the Film World

A Ricœurian Method for Film Interpretation

This book identifies a new methodological strategy for the interpretation of film philosophizing. Many recent works in film philosophy, adopting the approach identified with the term film as philosophy, have considered film as capable of doing philosophy.  Focused on the basic relationship between film and filmgoer, the proposed method is founded on the concept of the film world. Combining Merleau-Ponty’s and Ricœur’s philosophies, and reconsidering Goodman’s theory of worldmaking, the film world becomes the hermeneutic horizon from which film philosophical thought can emerge. The book shows how Ricœurian methodology has the potential to provide a valuable resource for film studies by inviting scholars to consider film interpretation in terms of film world hermeneutics.

“A serious intervention in film-philosophy and film theory, exploring how cinema might philosophise through hermeneutics, film worlds, and the concept of ‘re-perception’. Baracco’s three case studies of Manhattan, The King of Comedy, and Pretty Woman show in precise detail just how films think about identity, representation, and dream-reality. A true tour de force.” (John Ó Maoilearca, Kingston University, UK)

“Baracco constructs a meticulous phenomenological methodology for film interpretation. He brings together Ricoeur’s hermeneutics with Merleau Ponty’s phenomenology, and demonstrates how this enhances and develops close analysis of film experience and phenomenological interpretation using carefully chosen film case studies. Baracco’s inclusive and expansive approach is a valuable intervention in the field of film philosophy and a retort to the criticism that film phenomenology lacks rigour.” (Lucy Bolton, author of Film and Female Consciousness, UK)

“That cinema creates worlds is part of the artifices of film as an art. But to what extent can cinema contribute to conceptually framing our being-in-the world? Can film turn into a mode of philosophical hermeneutics? Solidly theorized, insightfully argued, and enriched by a broad range of case studies, Hermeneutics of the Film World provides an in-depth exploration of the speculative potential of film. Paving the way to the study of film as philosophy, Baracco’s important volume will become a mandatory reference for this fascinating and deeply innovative field of research.” (Serenella Iovino, University of Turin, Italy)

“An informed, original and insightful development of extant ideas concerning cinematic temporality and worldhood, interpretation and understanding, Baracco’s transposition of Ricoeur’s profound thought to cinema is illuminating and very welcome.  Bringing hermeneutics, phenomenology and ‘worlds theory’ to bear on contemporary debates concerning the philosophical status of moving-image works and media, film theorists and those working in philosophy and, of, and in film should find much to engage with in this rich and timely study. Highly recommended.” (Daniel Yacavone, University of Edinburgh, UK)