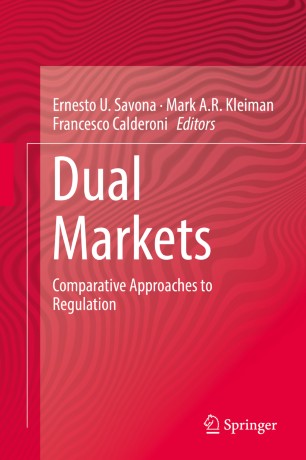 This comprehensive volume analyzes dual markets for regulated substances and services, and aims to provide a framework for their effective regulation. A “dual market” refers to the existence of both a legal and an illegal market for a regulated product or service (for example, prescription drugs). These regulations exist in various countries for a mix of public health, historical, political and cultural reasons. Allowing the legal market to thrive, while trying to eliminate the illegal market, provides a unique challenge for governments and law enforcement.
Broken down into nine main sections, the book studies comparative international policies for regulating these “dual markets” from a historical, legal, and cultural perspective. It includes an analysis of the markets for psychoactive substances that are illegal in most countries (such as marijuana, cocaine, opiods and amphetimines),  psychoactive substances which are legal in most countries and where consumption is widespread (such as alcohol and tobacco), and services that are generally regulated or illegal (such as sports betting, the sex trade, and gambling). For each of these nine types of markets, contributions focus on the relationship between regulation, the emerging illegal market, and the resulting overall access to these services.

This work aims to provide a comprehensive framework from a historical, cultural, and comparative international perspective. It will be of interest to researchers in criminology and criminal justice, particularly with an interest in organized crime, as well as related fields such as sociology, public policy, international relations, and public health.

Ernesto U. Savona is Director of Transcrime (Joint Research Center on Transnational Crime) of the Università Cattolica del Sacro Cuore, Milan, and Professor of Criminology at the same University since 2002. Previously, we taught at the University of Trento and University of Rome La Sapienza. He is Editor-in-Chief of the European Journal of Criminal Policy and Research (Springer). He is the Past President of the European Society of Criminology (2003/2004), and Chair for the term 2011-2012 of the Global Agenda Council of Organized crime of the World Economic Forum. Professor Savona is member of the European Commission Expert Group on Policy Needs for Data on Crime, and the expert the group on Firearms. His research interests and key publications include books and articles on organized crime, money laundering, and corruption. His last books are: Leclerc, B. and Savona, E.U. (eds.) (2016) Crime Prevention in the XXI Century, Springer; Savona, E.U., Berlusconi, G. and Riccardi, M. (eds.) (2016) Organised Crime in European Businesses, Routledge; Savona, E.U. and Calderoni, F. (2015) (eds.) Criminal Markets and Mafia Proceeds, Routledge, London. He is the coordinator of Project PROTON (Modelling the PRocesses leading to Organised crime and TerrOrist Networks) under the Horizon 2020 EU Programme, started on October 2016.

Mark A.R. Kleiman is a Professor of Public Policy New York University’s Wagner School of Public Service and Director of the Crime & Justice Program at New York University’s Marron Institute of Urban Management. In addition to his work at NYU, Mr. Kleiman is Chairman of BOTEC Analysis, a private research and consulting firm, a member of the Committee on Law and Justice of the United States National Research Council, and co-editor of the Journal of Drug Policy Analysis. For 19 years he served as a Professor of Public Policy at UCLA’s Luskin School of Public Affairs. He also taught at his alma mater, the Kennedy School of Government at Harvard University, where he earned master’s and doctoral degrees in public policy. Prior to his academic career, Mr. Kleiman served as director of the Office of Policy and Management Analysis in the Criminal Division of the U.S. Department of Justice. Mr. Kleiman’s recent subject areas include methods for accommodating imperfect rational decision-making in policy, designing deterrent regimes that take advantage of positive-feedback effects, and the substitution of swiftness and predictability for severity in the criminal justice system. He is a frequent blogger and speaker at international conferences, and he is the author of five books on drug and criminal justice policy.

Francesco Calderoni is associate professor of Criminology and researcher at Transcrime (Joint Research Center on Transnational Crime) and Università Cattolica del Sacro Cuore of Milan. At Transcrime, he participated in many research projects, often with the role of team or project coordinator. He is the coordinator of the Master of Science in Public Policies, major in Policies for Security and of the International Ph.D. in Criminology at Università Cattolica del Sacro Cuore. He was expert of the Council of Europe for the reform of the Criminal Procedure Code of Georgia (2006) and Ukraine (2007) and of the German Foundation for International Legal Cooperation for the reform of the Criminal Procedure Code of Romania (2007). In 2010 he was awarded the Ambrosoli Prize by the Municipality of Milan for the best ph.d. thesis on the relationship among ethics, legality and justice. In 2014 he was awarded the Canada-Italy Innovation Award for the analysis of criminal networks. In 2016, he was appointed by the Italian Ministry of Justice as a member of the group of experts on mafias and globalization. His areas of interest are organized crime, illicit trade in tobacco products, organized crime legislation, criminal justice reforms, crime proofing of legislation and social network analysis.