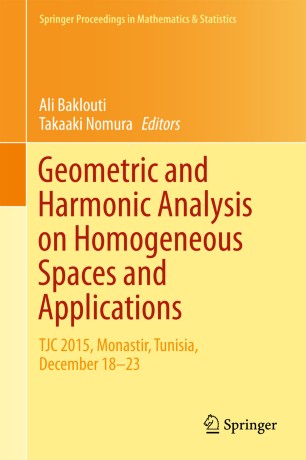 TJC: International Conference on Geometric and Harmonic Analysis on Homogeneous Spaces and Applications

Geometric and Harmonic Analysis on Homogeneous Spaces and Applications

This book provides the latest competing research results on non-commutative harmonic analysis on homogeneous spaces with many applications. It also includes the most recent developments on other areas of mathematics including algebra and geometry.
Lie group representation theory and harmonic analysis on Lie groups and on their homogeneous spaces form a significant and important area of mathematical research. These areas are interrelated with various other mathematical fields such as number theory, algebraic geometry, differential geometry, operator algebra, partial differential equations and mathematical physics.
Keeping up with the fast development of this exciting area of research, Ali Baklouti (University of Sfax) and Takaaki Nomura (Kyushu University) launched a series of seminars on the topic, the first of which took place on November 2009 in Kerkennah Islands, the second in Sousse  on December 2011, and the third in Hammamet&
nbsp;on December 2013. The last seminar, which took place on December 18th to 23rd 2015 in Monastir, Tunisia, has promoted further research in all the fields where the main focus was in the area of Analysis, algebra and geometry and on topics of joint collaboration of many teams in several corners. Many experts from both countries have been involved.