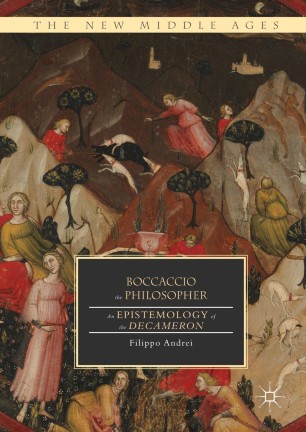 An Epistemology of the Decameron

This book explores the tangled relationship between literary production and epistemological foundation as exemplified in one of the masterpieces of  Italian literature. Filippo Andrei argues that Giovanni Boccaccio's Decameron has a significant though concealed engagement with philosophy, and that the philosophical implications of its narratives can be understood through an epistemological approach to the text. He analyzes the influence of Dante, Petrarch, Thomas Aquinas, Aristotle, and other classical and medieval thinkers on Boccaccio's attitudes towards ethics and knowledge-seeking.  Beyond providing an epistemological reading of the Decameron, this book also evaluates how a theoretical reflection on the nature of rhetoric and poetic imagination can ultimately elicit a theory of knowledge.

Filippo Andrei is Adjunct Professor at the California State University International Program in Florence. He has previously held the position of Lecturer at the University of California, Berkeley and San Francisco State University. Born in Florence, his research interests include Italian Literature, Romance Philology and Medieval Latin Literature. His essays have appeared in several specialized journals.