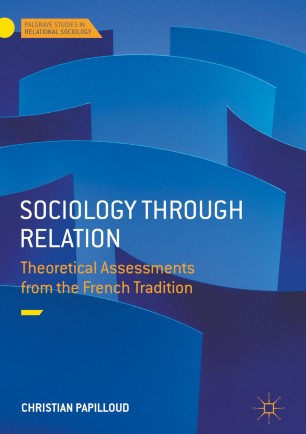 Theoretical Assessments from the French Tradition

This book delivers a top-down understanding of relation as a macro-phenomenon in society. This understanding rests on the reconstruction of an ongoing debate in the French tradition about the purpose of a relational perspective in sociology and the social sciences. Christian Papilloud analyzes the cardinal steps of this debate, which historically relate to the concept of solidarity, expressing an ideal of social cohesion through relationships between personal and non-personal actors. In social theory, it is well-known that solidarity refers to Emile Durkheim. But little is known about the controversies generated in relation to the purpose of a relational perspective in sociology. Papilloud reconstructs and follows the most important of these controversies in a comparative perspective, beginning with Emile Durkheim and Gaston Richard on solidarity, Richard and Marcel Mauss on sacrifice and magic, Mauss and Pierre Bourdieu on gift and social positions, Bourdieu and Bruno Latour on the objects of exchanges and institutions, and Latour and Durkheim on reciprocity and control. These comparisons give shape to a theoretical framework for a 'sociology through relation.

Christian Papilloud is a sociologist at the University of Halle-Wittenberg, Germany. He was written and edited several books and articles on the relational perspective in sociology based on the controversies between French and German scholars today and yesterday.