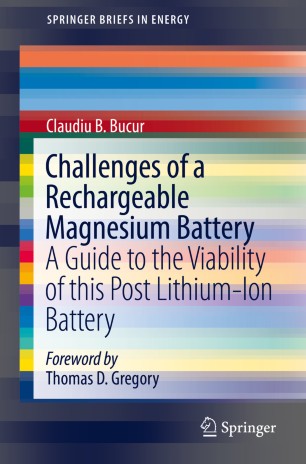 Challenges of a Rechargeable Magnesium Battery

A Guide to the Viability of this Post Lithium-Ion Battery

This expert volume addresses the practical challenges which have so far inhibited the commercial realization of a rechargeable magnesium battery, placing the discussion within the context of the already established lithium-ion battery. Lithium-ion batteries are becoming commonplace in most power applications, starting with portable electronics and expanding to motor vehicles, stationary storage, and backup power. Since their introduction 25 years ago, they have slowly been replacing all other battery chemistries. As the technology has matured, it is nearing its theoretical limits in terms of energy density, so research and development worldwide is quickly shifting towards the study of new battery chemistries with cheaper components and higher energy densities.
A very popular battery candidate which has generated a lot of recent interest is the magnesium rechargeable battery. Magnesium is five orders of magnitude more abundant than lithium, can move two electron
s per cation, and is known to plate smoothly without any evidence of dendritic growth.  However, many challenges remain to be overcome. This essential volume presents an unfiltered view on both the realistic promises and significant obstacles for this technology, providing key insights and proposed solutions.

Claudiu B. Bucur obtained his Ph.D degree in 2008 from Florida State University under the mentorship of distinguished Leo Mandelkern Professor of Polymer Science, Joseph B. Schlenoff. He studied the manner in which polyelectrolyte multilayers assemble, and how doping them with ions changes their mechanical and thermodynamic properties. In 2010 he completed his postdoctoral studies at the USDA Agricultural Research Service Labs, where he investigated corrosion inhibition via biomembranes. Dr. Bucur then joined the Post Lithium Ion Research Group at the Toyota Research Institute of North America, where he focused on metallic anodes such as magnesium, lithium, sodium, and their electrolytes as well as high capacity conversion cathodes such as the sulfur cathode. He expanded upon his experience with polymers, corrosion, and interfaces and was able to advance many areas in the battery field. Currently, Dr. Bucur is Chief Engineer for new battery and solid electrolyte projects at Great Wall Motor, the largest SUV manufacturer in China. He is fascinated by energy storage, and dreams of creating the ultimate battery.