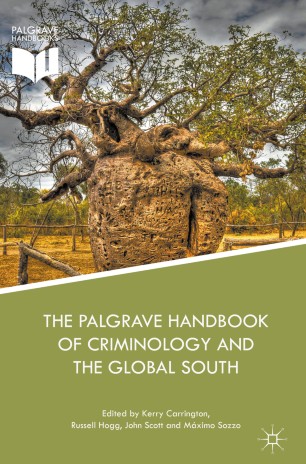 The Palgrave Handbook of Criminology and the Global South

The first comprehensive collection of its kind, this handbook addresses the problem of knowledge production in criminology, redressing the global imbalance with an original focus on the Global South. Issues of vital criminological research and policy significance abound in the Global South, with important implications for South/North relations as well as global security and justice. In a world of high speed communication technologies and fluid national borders, empire building has shifted from colonising territories to colonising knowledge. The authors of this volume question whose voices, experiences, and theories are reflected in the discipline, and argue that diversity of discourse is more important now than ever before.
Approaching the subject from a range of historical, theoretical, and social perspectives, this collection promotes the Global South not only as a space for the production of knowledge, but crucially, as a source of innovative research and theory on crime and justice. Wide-ranging in scope and authoritative in theory, this study will appeal to scholars, activists, policy-makers, and students from a wide range of social science disciplines from both the Global North and South, including criminal justice, human rights, and penology.

“As we move further and further into the 21st Century, unanticipated and harmful consequences of northern ways of being and doing, that have long been celebrated as pinnacles of human achievements, are, quite unexpectedly and quite suddenly, being revealed. Climate change provides but one emblematic example. Through what the editors  term a 'project of redemption’, the authors of this insightful, and much needed, volume employ criminology and the global South as lenses to ‘open our eyes to new ways of seeing and our minds to new ways of thinking’.” (Clifford Shearing, Universities of Cape Town, South Africa; Griffith, Australia and Montreal, Canada)

“This Handbook embodies for criminology a revolutionary change that is influencing and challenging all the social sciences. This is work that prioritises the experience of colonized and postcolonial societies, and values the intellectual work done in the periphery. It does not abandon ideas and methods developed in the global North, but sets them in a different logic of knowledge-making. It calls their universality into question and combines them with very different agendas and perspectives. Once this process is set in motion, a vast terrain opens up.

While organized around the historical relations of colonization and post-colonial power, a Southern criminology does not produce simple categories. Both “North” and “South” name multiple and changing social formations. These complexities are well represented in this Handbook, ranging across affluent settler-colonial countries, poor developing countries, emerging economic powers, and the offshore transnational corporations that have increasingly replaced states as the centres of global capitalism.

Any Southern criminology must call into question familiar concepts and understandings. An important theme in this Handbook is the role of the state, conventionally seen as the source of law and embodiment of justice. Many of the contributions here recognize the pervasiveness of state violence and injustice in the making of global empire.

This Handbook has significance beyond its contribution to criminology and our understanding of the specifics of crime, policing and violence. It contributes to a major transformation of our knowledge of social processes in general. There are rich resources here, multiple points of view, a wealth of information and re-thinking. I hope their work travels widely into the world.’ (Raewyn Connell, University of Sydney, Australia)

“The Global North is located cartographically above the Global South only by a convention. Yet without the South, there is no North, but when the latter analyzes their violent conflicts, they often forget the South, where in some occasions we copy those analysis, reproducing paradoxically this silence. This attitude can‘t be justified and reproduced any longer. As illustrated by the many contributions of this Handbook, colonialism and neocolonialism has to be put at the center stage of the field of criminology in order to redraw our concepts and arguments.” (Emeritus Professor Raul Zaffaroni, University of Buenos Aires, Argentina)

“The Handbook offers a comprehensive, detailed and ground-breaking analysis of southern criminology across multiple countries and topics. It takes a multi-pronged approach to understanding the ways criminology can both reproduce and confront economic, social and knowledge inequalities and shows how southern criminology unsettles taken for granted understandings. This collection does southern criminology, it does not just describe it, and confronts the crimes of the powerful and experiences of the powerless to provide a new and refreshing approach to crime and justice.” (Sharyn Roach Anleu, Matthew Flinders Distinguished Professor, Flinders University, Australia)