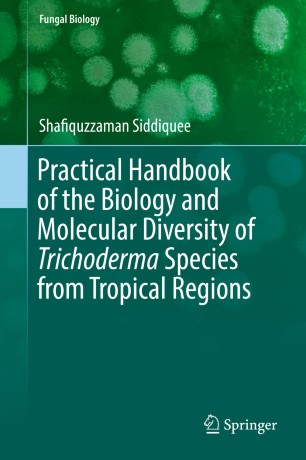 This book analyzes the right pathway to solve the controversial identifications of some Trichoderma species on the basis of sampling procedures, slide culture techniques, macroscopic and microscopic analysis, and molecular tools.
Most species of the genus Trichoderma grow rapidly in artificial culture and produce large numbers of small green or white conidia from conidiogenous cells located at the ends of conidiophores. The morphological characters are reported to be variable to a certain degree in their color, shape of conidia, conidiophore, pustules and phialade. These characteristics allow a comparatively easy means of identification of Trichoderma as a genus, but the species concept is difficult to deduce and there is considerable confusion over the application of specific names.
This work provides an essential link between data and taxa as a means to verify the taxonomic characters of the strains sequenced, and mac
roscopic and microscopic characteristics. Otherwise, a species level identification study cannot be corrected or uncorrected and the user has to rely on the person making the misidentification.

Shafiquzzaman Siddiquee, PhD is an associate professor at the Biotechnology Research Institute of Universiti Malaysia Sabah (UMS), Malaysia. Dr. Siddiquee obtained his MSc (Molecular Microbiology) and PhD (Bioelectrochemistry) degrees in 2008 and 2010, respectively from University Putra Malaysia (UPM), Malaysia. In 2011, Dr. Siddiquee received a Best Post Graduate Award from UPM for being the most outstanding postgraduate student of the year. In 2014, he was the winner of the ProSPER.net-Scopus Young Scientist Award in the category of Sustainable Agriculture. He served as a guest professor at the Institute of Analytical Chemistry, Chemo- and Biosensors of the University of Regensburg, Germany. Currently he is a head of the UMS Biosensor Research Group. He is involved in varying types of research areas, including chemo- and bio- sensors based research, and Trichoderma biodiversity and its applications. He has published over 65 refereed journal articles, 4 bo

oks, 10 book chapters and 30 proceeding papers. His findings yielded, so far, 4 patents, 5 invited speakers and 40 research awards, including awards from the 2015 MOHE entrepreneurial Project Award and the International Conference and Exposition on Inventions by Institutions of Higher Learning 2015 (PECIPTA). Both nationally and internationally, Dr. Siddiquee has established relevant research group networks. In pop culture, Dr. Siddiquee findings' have been broadcast in Malaysian national television (TV1, TV2 and TV7) and highlighted in various printed media.