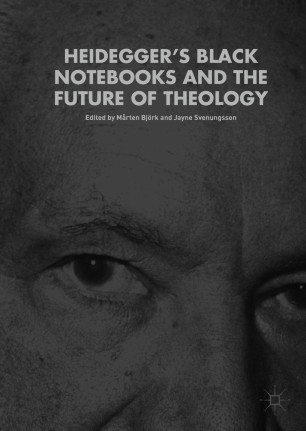 Heidegger’s Black Notebooks and the Future of Theology

This book probes the relationship between Martin Heidegger and theology in light of the discovery of his Black Notebooks, which reveal that his privately held Antisemitism and anti-Christian sentiments were profoundly intertwined with his philosophical ideas. Heidegger himself was deeply influenced by both Catholic and Protestant theology. This prompts the question as to what extent Christian anti-Jewish motifs shaped Heidegger’s own thinking in the first place. A second question concerns modern theology’s intellectual indebtedness to Heidegger. In this volume, an array of renowned Heidegger scholars – both philosophers and theologians –investigate Heidegger’s animosity toward the biblical legacy in both its Jewish and Christian interpretations, and what it means for the future task and identity of theology.

Mårten Björk is a doctoral student in Theology and Religious Studies at Gothenburg University, Sweden. He is the author and editor of two books in Swedish and has published several international articles. He contributes regularly to various Scandinavian magazines and is on the editorial board of the cultural journal Subaltern.

Jayne Svenungsson is Professor of Systematic Theology at Lund University, Sweden. She is the author of Divining History: Prophetism, Messianism and the Development of the Spirit (2016) and co-editor of Jewish Thought, Utopia and Revolution (2014), Monument and Memory (2015) and The Ethos of History: Time and Responsibility (2018).

“This superb collection of studies, which illuminates some of the darkest corners of Heidegger’s thought—his antisemitism, the ‘last god’ among them—shows us still one more time why Heidegger was his own worst enemy, and why theology will forever be haunted by Heidegger, for better and for worse.” (John D. Caputo, Professor Emeritus of Religion, Syracuse University, and Professor Emeritus of Philosophy, Villanova University, USA)

“For decades, the nexus between Heidegger and academic theology has comprised a rich and innovative field. However, the recent publication of the philosopher’s Black Notebooks, which are suffused with anti-Semitic invective, have, for many, cast doubt on the ultimate serviceability of Heidegger’s doctrines and views. The essays collected in Heidegger’s Black Notebooks and the Future of Theology constitute a thoughtful and timely effort to reflect on the major interpretive dilemmas that have arisen in the wake of the Black Notebooks’ publication.” (Richard Wolin, Distinguished Professor of History and Political Science, CUNY Graduate Center, USA)

“This remarkable volume elucidates the complex relation between Heidegger and theology in the light of his Black Notebooks. The contributors engage critically with Heidegger’s writings and pose important questions regarding the implications of Heidegger’s Nazism and antisemitic stereotypes for the future reception of his work. Assembling insights from Jewish thought, Catholic and Protestant theology, religious studies, continental philosophy and intellectual history, this collection of essays presents prime examples of the controversy on the (in)compatibility between Heidegger’s ontology and biblically rooted interpretations of time and history, the (in)finitude of human existence and the God-relationship. Moreover, Heidegger’s work is brought into thought-provoking dialogue with classic texts by, for instance, Augustine, Kierkegaard, Guardini, Bultmann, Barth, Rosenzweig, Levinas, Arendt, and Jonas.” (Claudia Welz, Professor of Systematic Theology, University of Copenhagen, Denmark)