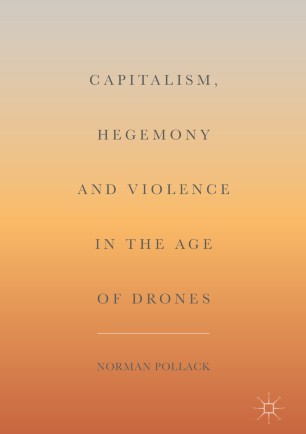 Capitalism, Hegemony and Violence in the Age of Drones

This book offers a critical analysis of the rise of the US to global hegemony against a background of increased erosion of democracy and rule of law, and a rising linear pattern of near-absolute capitalist development. The author argues that the significant shrinkage of the ideological spectrum globally, as a result of worrisome levels of business and government interpenetration, has created a dangerous 'prefascist configuration' whereby unthinkable levels of violence have been normalized through the use of technologies such as drones, increasingly condoned even by 'liberal' groups and the so-called political left. Using the example of the Obama administration and its increased reliance on drone assassinations, the volume makes a case for the dangers that lie in today's unique convergence of lack of transparency in government, business-government interpenetration, informal social regimentation, and militarization of capitalism.

​Norman Pollack was Professor of History emeritus at Michigan State University and previously taught at Yale University and Wayne State University, USA.  His published works include The Populist Response to Industrial America, The Just Polity, and The Humane Economy. In his last years, he frequently wrote for the online magazine Counterpunch.