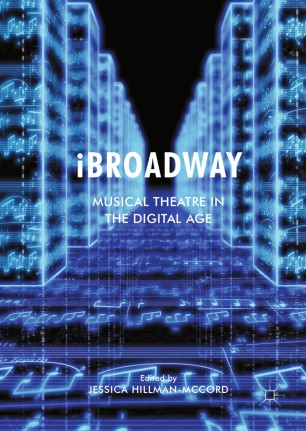 Musical Theatre in the Digital Age

This book argues that the digital revolution has fundamentally altered the way musicals are produced, followed, admired, marketed, reviewed, researched, taught, and even cast. In the first hundred years of its existence, commercial musical theatre functioned on one basic model. However, with the advent of digital and network technologies, every musical theatre artist and professional has had to adjust to swift and unanticipated change. Due to the historically commercial nature of the musical theatre form, it offers a particularly potent test case to reveal the implications of this digital shift than other theatrical art forms. Rather than merely reflecting technological change, musical theatre scholarship and practice is at the forefront of the conversation about art in the digital age. This book is essential reading for musical theatre fans and scholars alike.

Jessica Hillman-McCord is Associate Professor at SUNY Fredonia, USA. Her articles have appeared in TDR: The Drama Review, Studies in Musical Theatre and Theatre Topics, among others. Her book, Echoes of the Holocaust on the American Musical Stage, was published in 2012.