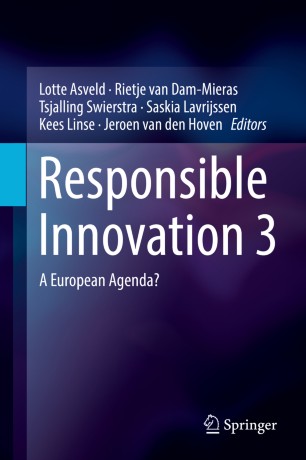 This book offers a comprehensive overview of current developments in the field of Responsible Research and Innovation (RRI). Divided into three parts, the book first presents reflections on the concept of RI from various angles: how did it come about, who is involved and how might in be applied in various contexts, such as the academic environment or in developing countries. The second part discusses the actual application of RRI to technology development: for climate engineering, water management and energy technology along with a general discussion on how to integrate RRI in innovation trajectories. The last part offers a closer look at the application of RRI to the business context. This part offers lessons from comparable concepts such as social and sustainability innovation as well as insights from two case-studies, one in the food sector and the other in data management. As a whole, the book contributes to the ongoing development of the framework of RRI by giving an overview of the state-of-the art research, presenting the lessons learned from several case studies, and showing the way for future application of RI in other fields and cultural contexts, such as industry and developing countries.

Lotte Asveld is an assistant professor at Delft University of Technology studying the societal aspects of biotechnology. Her main research interests concern responsible innovation in the field of biotechnology and synthetic biology: how can the societal debate on biotechnology and synthetic biology be integrated in innovation trajectories? Lotte has worked as a researcher in the department of Philosophy at DUT, where she also received her PhD. Her PhD concerned societal decisionmaking on technological risks. Lotte also worked as a researcher at the Rathenau Insitute, focusing on the bioeconomy, and as a freelance researcher in China.

Rietje van Dam-Mieras is Professor emeritus at Leiden University. She graduated in chemistry and  obtained her PhD in Biochemistry at Utrecht University. She subsequently worked at Maastricht University, the Open University of the Netherlands and Leiden University. She had a UNESCO Chair at the Open University and was visiting professor at the United Nations University Institute of Advanced Studies. She is a founding member of RCE Rhine-Meuse and has been actively involved in the RCE-initiative of United Nations University (UNU) in the context of the UN Decade Education for Sustainable development (UN DESD 2005-2014). Her main fields of interest are Sustainable Development, BioBased Economy and innovation of education using modern technology. She has been and still is a member of several national and international advisory and supervisory committees.

Prof Dr. Tsjalling Swierstra (1960) studied philosophy and political science in Amsterdam and Groningen. He researches philosophical, ethical and political, questions concerning technology in general, and concerning medical biotechnology in particular. Swierstra is chair of the Department of Philosophy at Maastricht University, and Director of the Graduate School of the Faculty of Arts and Social Sciences. He is also director of the recently established Centre for the Ethics and Politics of Emerging Technologies, and chairs the Dutch Society of the Philosophy of Medicine.

Saskia Lavrijssen is Professor of Economic Regulation and Market Governance of Network Industries. Before she was (part-time) professor of Consumer and Energy Law at the University of Amsterdam after having worked as an associate professor of Public Economic Law at Utrecht University. She has been teaching at Tilburg Law School since April 2014, both as assistant professor and as associate professor.  Lavrijssen specialized in European law, competition law, energy law, economic regulation and public law. She published many papers on market regulation in national as well as international scientific journals. In 2010 she received an award by the Dutch Association for Competition Law for the best multi-disciplinary paper on public law and competition law, for the article 'What role for National Competition Authorities in protecting non-competition interests after Lisbon?' which was published in the prestigious European Law Review

Kees Linse graduated in Chemistry at Utrecht University and obtained a PhD in Physics at Leiden University. After working for 32 years in Royal Dutch Shell he now holds various supervisory and nonexecutive director positions, among which TNO (Dutch Organisation for Applied Physics), LUMC (Leiden University Medical Centre) and the Netherlands Commission for Environmental Assessment.