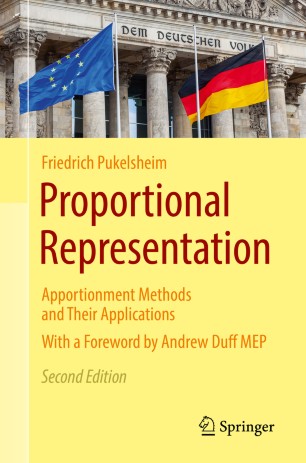 Apportionment Methods and Their Applications

The book offers an in-depth study of the translation of vote counts into seat numbers in proportional representation systems  – an approach guided by practical needs. It also provides plenty of empirical instances illustrating the results. It analyzes in detail the 2014 elections to the European Parliament in the 28 member states, as well as the 2009 and 2013 elections to the German Bundestag. This second edition is a complete revision and expanded version of the first edition published in 2014, and many empirical election results that serve as examples have been updated. Further, a final chapter has been added assembling biographical sketches and authoritative quotes from individuals who pioneered the development of apportionment methodology. The mathematical exposition and the interrelations with political science and constitutional jurisprudence make this an apt resource for interdisciplinary courses and seminars on electoral systems and apportionment methods.

Friedrich Pukelsheim is professor emeritus of University of Augsburg, where he held the Chair for Stochastics and its Applications from 1983 to 2014. The book grew out of interdisciplinary courses and seminars on electoral systems and apportionment methods conducted during many years in Augsburg and at other academic institutions.
Pukelsheim has published extensively on apportionment issues in journals of mathematics, statistics, political sciences, state law, and history. He has testified as an expert witness before legal and political bodies, including the European Parliament, the German Bundestag, and several German State Diets and Swiss Canton Parliaments.