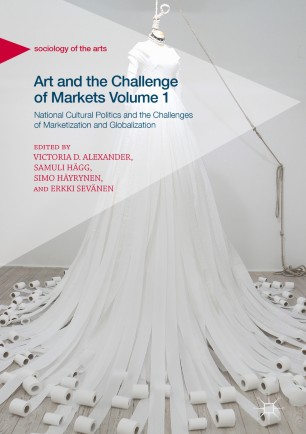 Art and the Challenge of Markets Volume 1

National Cultural Politics and the Challenges of Marketization and Globalization

Part of the Sociology of the Arts book series (SOA)

Art and the Challenge of Markets Volumes 1 & 2 examine the politics of art and culture in light of the profound changes that have taken place in the world order since the 1980s and 1990s. The contributors explore how in these two decades, the neoliberal or market-based model of capitalism started to spread from the economic realm to other areas of society. As a result, many aspects of contemporary Western societies increasingly function in the same way as the private enterprise sector under traditional market capitalism.

The first volume of this two-volume collection considers a broad range of national cultural policies from European and North American countries, and examines the strengthening of international and transnational art worlds in music, visual arts, film, and television. The chapters cover cultural policy and political culture in the United States, United Kingdom, Germany, France, Switzerland, the Nordic countries, the Balkans, and Slovenia, and address the extent to which Western nations have shifted from welfare-state to market-based ideologies. Tensions between centres and peripheries in global art worlds are considered, as well as   complex interactions between nations and international and transnational art worlds, and regional variations in the audiovisual market.

Both volumes provide students and scholars across a range of disciplines with an incisive, comparative overview of the politics of art and culture and national, international and transnational art worlds in contemporary capitalism.

“This anthology starts by observing the increasing role of markets in art, and the clear imbalance of power that results. As markets are in constant flux, oscillating between structuring and deregulation, it is by no means easy to describe and analyse their dynamics and ambiguous developments. The authors took on this challenge and delivered a rich and critical analysis – not only of the process of marketization in the context of neoliberal cultural policies (vol. 1), but also of the contemporary art’s potential to enhance a democratic civil life which improves people’s well-being (vol. 2). So to quote Georg Christoph Lichtenberg: “Let him who has two pairs of trousers turn one of them into cash and purchase this book!” (Tasos Zembylas, Professor for Cultural Institution Studies, Department for Music Sociology, University of Music and Performing Arts Vienna)
Buy options