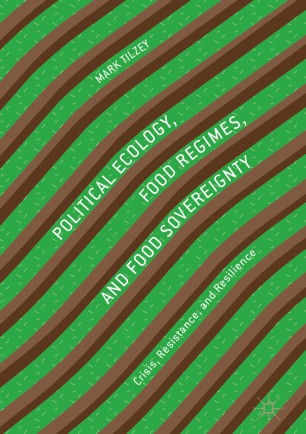 Political Ecology, Food Regimes, and Food Sovereignty explores whether there are environmental limits to capitalism and its economic growth by addressing the ongoing and inter-linked crises of food, fossil fuels, and finance. It also considers its political limits, as the globally burgeoning ‘precariat’, peasants and indigenous people resist the further commodification of their livelihoods.

This book draws from the field of Political Ecology to approach new ways of analysing capitalism, the environment and resistance, and also to propose new solutions to the current agro-ecological-economic crisis. It will be of particular interest to students and academics of Environmental Sociology, Human Geography, and Environmental Geography.

Mark Tilzey is Senior Research Fellow in the Governance of Food Systems for Resilience at Coventry University, UK. His research interests include political ecology, agroecology, agri-environmental politics and governance, and the international political economy of agri-food systems.

“Employing a political economy approach, in this relevant book, Mark Tilzey probes the relationship between the growth of global neoliberal capitalism and the crises of agri-food and the environment.  Dwelling on the concept of food sovereignty, Tilzey argues that resistance to global neoliberal capitalism is weak and calls for the creation of substantive anti-hegemonic forms of opposition. Moving from history to theory, Tilzey offers a novel and incisive critique of existing interpretations of the evolution of agri-food that is based on the dialectical relationship between the finite naturel of the environment and its socially constructed dimension. Endowed with theoretical and historical clarity this book constitutes a powerful contribution to the literature.” (Alessandro Bonanno, Sam Houston State University, USA)

“Over the last three decades, research on the political economy of food regimes, as exemplified by the pioneering work of Harriet Friedmann and Philip McMichael, has revolutionized how we look at the development of agriculture within the capitalist world system. With this book, Mark Tilzey emerges as a major new theorist and historical analyst within food systems research, standing beside Friedmann and McMichael. His analysis of the “first food regime” of the early-to-mid nineteenth century, his treatment of the concept of food sovereignty, his explorations of ecological Marxism, and his critical case studies of neoliberal food regimes, as well as socialist alternatives, all make this book a quarry of ideas, to which the interested reader will no doubt feel compelled to return again and again.” (John Bellamy Foster, University of Oregon, USA)