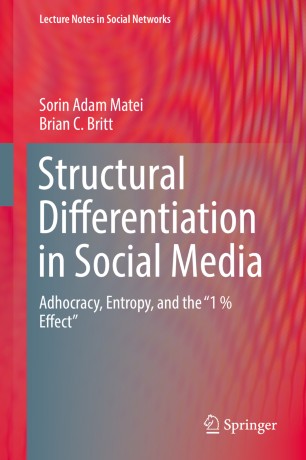 Adhocracy, Entropy, and the "1 % Effect"

This book explores community dynamics within social media. Using Wikipedia as an example, the volume explores communities that rely upon commons-based peer production. Fundamental theoretical principles spanning such domains as organizational configurations, leadership roles, and social evolutionary theory are developed. In the context of Wikipedia, these theories explain how a functional elite of highly productive editors has emerged and why they are responsible for a majority of the content. It explains how the elite shapes the project and how this group tends to become stable and increasingly influential over time. Wikipedia has developed a new and resilient social hierarchy, an adhocracy, which combines features of traditional and new, online, social organizations. The book presents a set of practical approaches for using these theories in real-world practice.
This work fundamentally changes the way we think about social media leadership and evolution, emphasizing the crucial contributions of leadership, of elite social roles, and of group global structure to the overall success and stability of large social media projects. Written in an accessible and direct style, the book will be of interest to academics as well as professionals with an interest in social media and commons-based peer production processes.

Sorin Adam Matei, Professor, Brian Lamb School of Communication, Purdue University, Director of the Data Storytelling Network, Purdue University. Dr. Matei specializes in big data research that investigates the evolution of social media collaborative groups. He is also interested in how social ties and social capital emerging in social media groups generate stable social structures and functional roles. His work was funded by the National Science Foundation and was published in article and book format by the Journal of Communication, Communication Research, American Behavioral Scientist, Springer Nature, and other outlets.

fessor, Department of Journalism and Mass Communication, South Dakota State University. Dr. Britt is a computational social scientist who focuses on the intersection between organizational communication and new media, with a particular emphasis on the strategies employed by individuals positioning themselves in online organizations. His work has been funded by the National Science Foundation and the National Institutes of Health and has resulted in several book chapters in edited volumes.