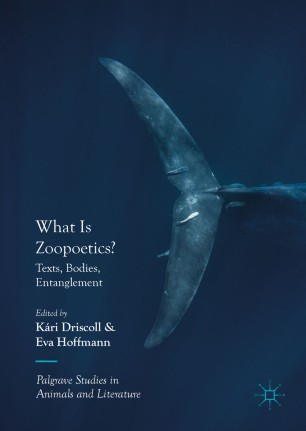 This book brings together essays dealing with the question of zoopoetics both as an object of study—i.e. texts from various traditions and periods that reflect, explicitly or implicitly, on the relationship between animality, language and representation—and as a methodological problem for animal studies, and, indeed, for literary studies more generally. What can literary animal studies tell us about literature that conventional literary studies might be blind to? How can literary studies resist the tendency to press animals into symbolic service as metaphors and allegories for the human whilst also avoiding a naïve literalism with respect to the literary animal? The volume is divided into three sections: “Texts,” which focuses on the linguistic and metaphorical dimensions of zoopoetics; “Bodies,” which is primarily concerned with mimesis and questions of embodiment, performance, and lived experience; and “Entanglement,” which focuses on interspecies encounters and the complex interplay between word and world that emerges from them. The volume will appeal to scholars and students in the fields of animal studies, area studies and comparative literature, gender studies, environmental humanities, ecocriticism, and the broader field of posthumanism.

Kári Driscoll is Assistant Professor of Comparative Literature at Utrecht University, Netherlands. He holds a PhD (2014) in German Language and Literature from Columbia University. He has published on zoopoetics in the works of Franz Kafka, Hugo von Hofmannsthal, and Luigi Pirandello. He is the co-editor of Book Presence in a Digital Age (2017), and, with Susanne C. Knittel, of Memory after Humanism, a special issue of Parallax, 22, no. 4 (2017). He is also an award-winning translator.

Eva Hoffmann is Visiting Assistant Professor at the Department of German Studies and Gender Studies at Whitman College, WA, USA. She received her PhD at the University of Oregon at the Department of German and Scandinavian in 2017, and has a graduate certificate in Women’s and Gender Studies from the University of Oregon. She has published articles on Franz Kafka, Hugo von Hofmannsthal, and Orhan Pamuk. She also translated Elsa Asenijeff’s collection of short stories, Innocence, into English.

“This collection provides a long overdue corrective to the presumption that zoopoetics is simply devoted to literature and culture about animals. What Is Zoopoetics? undertakes something far more intellectually ambitious and ethically challenging: an exploration of the delicate, beguiling, and illuminating zoopoetics of humankind’s entanglement with animals, and with its own animality, in the domain of literature and beyond. Anyone interested in new ways to read “the animal question” far beyond its usual thematics will want this volume.” (Cary Wolfe, author of What Is Posthumanism? and Before the Law: Humans and Other Animals in a Biopolitical Frame)

“This bold new set of explorations in literary animal studies is aptly titled with a question:  What Is Zoopoetics? The answers are not only wide-ranging and complex demonstrations of the thick and tangled ways animals figure within and around textual practices, but they also unfold powerful new forms of questioning for the field—the hallmark of incisive scholarly work. The “material-semiotic knots” that literary animals pose to us have never seemed so urgent and captivating.” (Carrie Rohman, author of Stalking the Subject: Modernism and the Animal)

“Whether analyzing hunting narratives or poems of pets, the insightful essays in this volume remind us of the many ways in which our encounters with other animals are not only shaped by the language we use to represent them, but also of how our language is, in turn, affected by those animals who inspire, if not incite, a zoopoetics.” (Kari Weil, author of Thinking Animals: Why Animal Studies Now?)

“When I first read the term zoopoetics, I intuited that it had its own infinitude, that it, in and of itself, had the potential to be the impetus for a limitrophy that would compel readers to delve into the vast terrain where and when species meet. Each contribution of this collection contributes to the expansion of that vastness, from a queering of zoopoetics, to a hauntology, to a recognition that we human readers are not much more than hunters tracking the traces of these arcane markings on a printed page. If there was any doubt of the importance of zoopoetics to the discourse of Animal Studies, this collection puts it to rest. We may not be able to turn the tide of today’s mass extinction, but at least here we have a dialectic of ode and elegy, an homage to the critters, the co-creators of culture and consciousness.” (Aaron M. Moe, author of Zoopoetics: Animals and the Making of Poetry)

“A multifaceted introduction to the revolutionary new field of zoopoetics, this lively collection brings an international array of perspectives to question the interrelation of animals and language. Inspired by Derrida's coining of the term "zoopoetics" and his suggestion that all thinking comes from encounters with the gaze of animal beings, a new generation of scholars step beyond most critical animal studies to explore how literary works engage particular animal subjectivities and bodies. The result offers a profound destabilization of human arrogance. From Moby Dick to Kafka’s stories and many contemporary texts, these approaches recover human animality in poetry and narrative, examine our shared embodiment, overturn human assumptions of superiority, and question many forms of entanglement within a forgotten intense community. An exciting and necessary book for the present moment of danger threatening all animal life.” (Louise Westling, author of The Logos of the Living World: Merleau-Ponty, Animals, and Language)

“Animal studies has always been interested in animals in literature. For the most part, however, literary texts have been approached as sites for mining information about the various ways different cultures have at various times thought about and interacted with animals. Now, in response to the animal turn in literary studies, animal studies is beginning to undergo a poetic turn. The present volume offers the first comprehensive document of this poetic turn within animal studies, featuring a wide variety of in-depth case studies. Together, they present a panorama of potential answers to the question of what, specifically, zoopoetics is or could be.” (Roland Borgards, Director of the Würzburg Graduate School of Humanities, Germany)