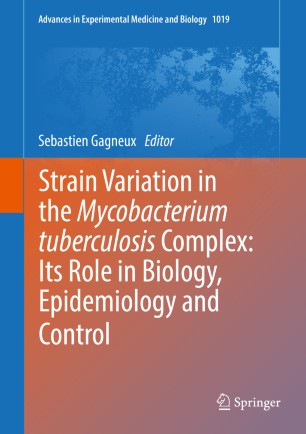 Strain Variation in the Mycobacterium tuberculosis Complex: Its Role in Biology, Epidemiology and Control

Part of the Advances in Experimental Medicine and Biology book series (AEMB, volume 1019)

Until about 10 years ago, the general view in the field was that Mycobacterium tuberculosis, the causative agent of human tuberculosis was a “clone” with insufficient natural sequence variation between clinical strains to be considered biologically and epidemiologically “relevant”. This view has now changed quite dramatically thanks to the –omics revolution, particularly the advent of next generation DNA sequencing. Large-scale comparative genomic studies over the last few years have revealed that M. tuberculosis clinical strains are more genetically diverse than appreciated previously. Moreover, an increasing number of experimental and epidemiological studies are showing that this genetic diversity also translates into important phenotypic variation. Taken together, these findings have led to a paradigm shift, such that currently phylogenetic diversity among M. tuberculosis clinical strains is being considered in the development of new tools to combat tuberculosis.
The purpose of this book is to bring together a series of contributions from some of the most influential groups working on various aspects of M. tuberculosis diversity, and which through their work have contributed to the this paradigm shift. This includes authors focusing on the evolution of M. tuberculosis in relation to other members of the M. tuberculosis complex adapted to animals, the co-evolution between M. tuberculosis and humans, the phenotypic consequences of strains diversity both from an experimental and epidemiological point of view, the ecology and evolution of drug resistant tuberculosis, the diversity and evolution of the BCG vaccine strains, and the use of mathematical modelling to study strain diversity and drug resistance in human tuberculosis. No such book has ever been published, and given the paradigm shift described above, this book will be a valuable resource both for established researchers as well as new scientists, clinicians and public health officials joining the growing field of tuberculosis research.

Sébastien Gagneux is Associate Professor of Infection Biology and Head of Department at the Swiss Tropical and Public Health Institute (Swiss TPH)/University of Basel. After receiving his PhD from the University of Basel, he worked as a postdoctoral fellow at Stanford University and at the Institute for Systems Biology in Seattle, USA. He then spent three years as a Program Leader at the MRC National Institute for Medical Research in London, UK before joining Swiss TPH. His research focuses on the ecology and evolution of Mycobacterium tuberculosis, and combines population genomics, molecular epidemiology and experimental approaches to study the effect of bacterial variation on host-pathogen interaction and drug resistance