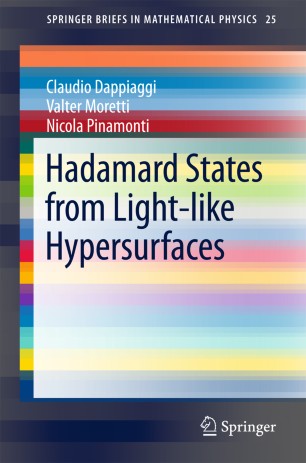 This book provides a rather self-contained survey of the construction of Hadamard states for scalar field theories in a large class of notable spacetimes, possessing a (conformal) light-like boundary. The first two sections focus on explaining a few introductory aspects of this topic and on providing the relevant geometric background material. The notions of asymptotically flat spacetimes and of expanding universes with a cosmological horizon are analysed in detail, devoting special attention to the characterization of asymptotic symmetries. In the central part of the book,  the quantization of a real scalar field theory on such class of backgrounds is discussed within the framework of algebraic quantum field theory.  Subsequently it is explained how it is possible to encode the information of the observables of the theory in a second, ancillary counterpart, which is built directly on the conformal (null) boundary.

This procedure, dubbed bulk-to-boundary correspondence, has the net advantage of allowing the identification of a distinguished state for the theory on the boundary, which admits a counterpart in the bulk spacetime which is automatically of Hadamard form. In the last part of the book, some applications of these states are discussed, in particular the construction of the algebra of Wick polynomials. This book is aimed mainly, but not exclusively, at a readership with interest in the mathematical formulation of quantum field theory on curved backgrounds.

“The book is brief, good review of the relevance and applications of Hadamard states in scalar field theories, intended for readers with special interest in the mathematical aspects of quantum field theory in curved spacetimes.” (Guillermo A. Mena Marugán, Mathematical Reviews, May 2018)​
Buy options