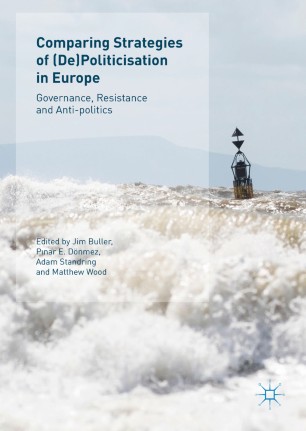 Comparing Strategies of (De)Politicisation in Europe

This book investigates the extent to which depoliticisation strategies, used to disguise the political character of decision-making, have become the established mode of governance within societies. Increasingly, commentators suggest that the dominance of depoliticisation is leading to a crisis of representative democracy or even the end of politics, but is this really true? This book examines the circumstances under which depoliticisation techniques can be challenged, whether such resistance is successful and how we might understand this process. It addresses these questions by adopting a novel comparative and interdisciplinary perspective. Scholars from a range of European countries scrutinise the contingent nature of depoliticisation through a collection of case studies, including: economic policy; transport; the environment; housing; urban politics; and government corruption. The book will be appeal to academics and students across the fields of politics, sociology, urban geography, philosophy and public policy.

Jim Buller is Senior Lecturer of Politics at the University of York, UK. He is a member of the British Political Studies Association (PSA) Anti-Politics and Depoliticisation Specialist Group.

Pınar E. Dönmez is Research Fellow at the Center For Policy Studies, Central European University, Hungary. She is a member PSA Anti-Politics and Depoliticisation Specialist Group.

Adam Standring is a PhD candidate in Political Science at the Universidade Nova de Lisboa, Portugal. He is a convenor and membership coordinator of the PSA Anti-Politics and Depoliticisation Specialist Group.

Matt Wood is Lecturer in Politics and Deputy Director of the Sir Bernard Crick Centre for the Public Understanding of Politics (Crick Centre) at the University of Sheffield, UK. He has previously worked in local journalism and lobbying, and has held visiting fellowship positions at the UK Cabinet Office and ANZSOG Institute for Governance, University of Canberra.