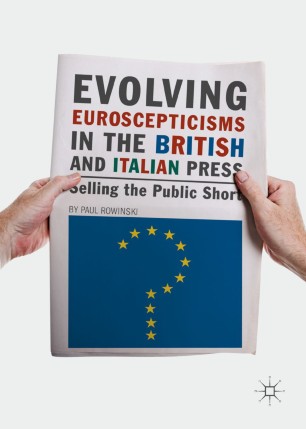 Evolving Euroscepticisms in the British and Italian Press

This book argues that the discursive construction of the EU in national newspapers is pivotal in creating an environment of Euroscepticism. The volume challenges the persuasive, manipulative and prejudicial language that is sometimes peddled in the influential UK Murdoch and Italian Berlusconi press, using the main focus points of the key Eurosceptic triggers of the euro; the subsequent national economic crises; and immigration, investigated through major events covered over two decades, including the UK’s recent Brexit vote and Italy’s constitutional crisis. Rowinski looks at the latest chapter of Euroscepticism: the increasingly key protagonists of the UK Independence Party and Italy’s Five Star Movement, who want to take Britain out of the EU and Italy out of the euro. This book offers a rigorous academic analysis presented in an accessible style to experts and laypersons alike, exploring concrete articulations of Euroscepticism in the press.

Paul Rowinski is Senior Lecturer at the University of Bedfordshire, UK, and has worked for the regional, national and transnational press for two decades, including as a UK central European correspondent.

“There is something refreshingly overt in the crusading, polemical passion of this book. … Rowinski in particular sets out to deconstruct the illusion of any ‘impartial […] fact-centred’ press cover-age of Europe. … In doing so, he crucially challenges a liberal model of press influence and responsibility as a disinterested watchdog mediating between power and the populace.” (Alec Charles, Journalism Education - The Journal of the Association for Journalism Education, Vol. 6 (3), 2017–2018)
Buy options