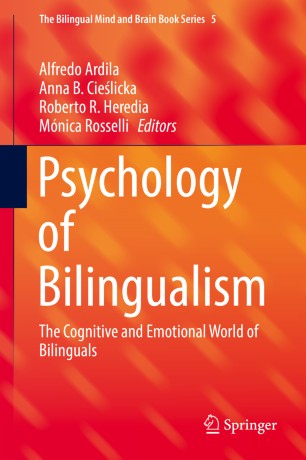 The Cognitive and Emotional World of Bilinguals

The aim of this volume is to integrate the current literature about the psychological dimensions of bilingualism: that is, to analyze psychological, subjective, and internal perspectives on bilingualism. What is the internal world of bilinguals like? How do they perceive the world and how do they think? What are the advantages and disadvantages of being bilingual? How does bilingualism interact with personality?  In what way does being bilingual impact the aging mind? Renowned and emerging scholars alike explore these questions in the collected chapters.
The organization of the book features four main component parts: (1) the inner cognitive world of the bilingual mind (2) bilingual language representation, and (3) bilingualism across the lifespan, and 4) bilingual cognitive and personality dimensions. Taken collectively, the included chapters provide a multidimensional and up-to-date perspective on bilingual studies, specifically concentrating on the cognitive and emotional dimensions of the individual. Chapter topics include:

Addressing the growing demand for bilingual research, this collection provides a timely and much needed perspective on the bilingual as an individual, exploring his/her internal world and a range of phenomena, including emotional word processing, personality traits, language effects on the mind, and cognitive effects of bilingualism. As such, it will appeal to a wide range of readers across various intellectual and professional arenas, including cognitive psychologists, personality psychologists, psycholinguists, educational psychologists and second language teachers, among others.

Alfredo Ardila has received his PhD from the Moscow State University in the field of neuropsychology. Currently, he is Professor at the Florida International University. His primary research interests include brain organization of cognition, historical origin of human cognition, aphasia, and bilingualism. He has received several awards and honors, such as the Latin American award in neurosciences.

Anna B. Cieślicka received her PhD from Adam Mickiewicz University in Poznań, Poland in the field of psycholinguistics. She is currently Associate Professor at Texas A&M International University (TAMIU) and Director of the MS in Psychology Graduate Program. Her research focuses mainly on the psycholinguistics of second/foreign language acquisition and processing, bilingual lexicon, figurative language, and neuropsychology of bilingualism. She is recipient of TAMIU’s Teacher of the Year and Scholar of the Year Awards and Alpha Delta Kappa Golden Apple Award for teaching excellence in higher education. She is Cofounder and Coeditor of The Bilingual Mind and Brain Book Series, published by Springer.

Roberto R. Heredia is Regents Professor at Texas A&M International University (TAMIU); his research interests include bilingual lexical processes, evolutionary psychology, figurative language processes, sentence processing, the neuroscience of bilingualism and cognition, bilingual memory, and information processing. He is a former Chair of the Behavioral Sciences department at TAMIU. He is Cofounder and Coeditor of The Bilingual Mind and Brain Book Series, published by Springer.

Mónica Rosselli received her Ph.D. in Biomedical Sciences (Neuropsychology) from the National Autonomous University of Mexico. She is currently Assistant Chair and Professor at the Department of Psychology at Florida Atlantic University, and heads the Neuropsychology Laboratory at FAU. She is an investigator of the 1Florida Alzheimer Disease Research Center (ADRC). Her research interests are in the areas of bilingualism, neuropsychological assessment, neurocognitive development, cross cultural neuropsychology and geriatric neuropsychology.