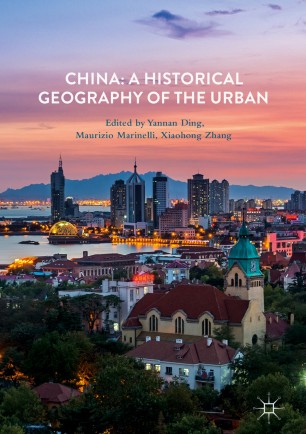 China: A Historical Geography of the Urban

This book offers a unique contribution to the burgeoning field of Chinese historical geography. Urban transformation in China constitutes both a domestic revolution and a world-historical event. Through the exploration of nine urban sites of momentous change, over an extended period of time, this book connects the past with the present, and provides much-needed literature on city growth and how they became complex laboratories of prosperity.
The first part of this book puts Chinese urban changes into historical perspective, and probes the relationship between nation and city, focusing on Shanghai, Beijing and Changchun. Part two deals with the relationship between history and modernity, concentrating on Tunxi, a traditional trade center of tea, New Villages in Shanghai and street names in Taipei and Shanghai. Part three showcases the complexities of urban regeneration vis-à-vis heritage preservation in cities such as Datong, Tianjin and Qingdao. This book offers an innovative interdisciplinary and international perspective, which will be of interest to students and scholars of Chinese urban studies, as well Chinese politics and society.

Yannan Ding is a Swire - Cathay Pacific visiting academic at St. Antony’s College, University of Oxford, UK.
Maurizio Marinelli is Associate Professor in East Asian History and Co-Director of the Asia Centre at the University of Sussex, UK.
Xiaohong Zhang is a professor and the head of the Institute of Chinese Historical Geography at Fudan University, China.

“This collection of fascinating essays on Chinese urban historical geography provides profound reflection on the meaning of the urban and the evolution of urbanism in China. The book fills the gap between urban studies and historical geography and reveals how urban transformations and contemporary city building are embedded in national development, politics and modernity, preservation and aesthetics in different historical periods.” (Fulong Wu, Bartlett Professor of Planning, University College London, UK)

“This fascinating collection of urban studies ranges across China’s urban geography over the past hundred years, exploring urbanism as it is manifested in a variety of ways. Some chapters take readers into intimate spaces of home and neighborhood; others explain the shape of the urban system over time; still others situate Chinese debates about urban planning and heritage within a global economy and transnational exchange of ideas. As a whole, the volume serves as an excellent introduction to the state of the field of urban Chinese historical geography and opens up new avenues for approaching Chinese and comparative urbanism.” (Kristin Stapleton, Professor of History, University at Buffalo, State University of New York)