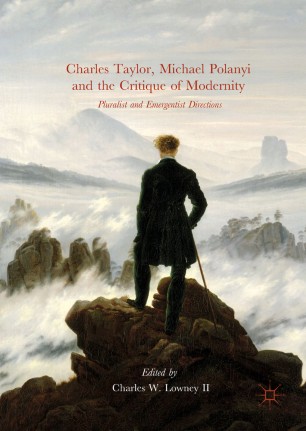 Charles Taylor, Michael Polanyi and the Critique of Modernity

This book provides a timely, compelling, multidisciplinary critique of the largely tacit set of assumptions funding Modernity in the West.  A partnership between Michael Polanyi  and Charles Taylor's thought promises to cast the errors of the past in a new light, to graciously show how these errors can be amended, and to provide a specific cartography of how we can responsibly and meaningfully explore new possibilities for ethics, political society, and religion in a post-modern modernity.

“Charles Lowney has shown here the convergence between the critiques of modern narrow rationalism offered by Michael Polanyi, on one hand, and 20th Century phenomenology (which was my starting point), on the other. A lot of interesting insights become available when these and other critiques are brought into contact. We are all in Lowney's debt for his valuable contribution.” (Charles Taylor, McGill University, author of A Secular Age, Modern Social Imaginaries and Sources of the Self)

“Readers of this collection will be well rewarded. There are two main paths to the task of critiquing modernity, the deconstructive and the reconstructive paths. The authors of the essays comprising this book have wisely chosen the latter, and they do so with clarity, thoroughness, and insight. Professor Lowney should be commended for putting this collection together, as well as for writing several of the essays himself. The various approaches to Michael Polanyi’s thought are especially welcomed.” (Jerry Gill, author of Deep Postmodernism: Whitehead, Wittgenstein, Merleau-Ponty and Polanyi, 2010)

“A splendid combination of philosophical erudition and moral sensitivity, this work brings into conversation two of the most important philosophers of our time, Michael Polanyi and Charles Taylor. The substantive commentaries, comparisons, and criticisms gathered in this volume offer readers convincing alternatives to the intellectually dubious scientism and corrosive moral relativism of our secular age. Strongly recommended.” (John F. Haught, Georgetown University, author of The New Cosmic Story: Inside Our Awakening Universe , 2017)

“Lowney and his collaborators show that Charles Taylor extends the work of Michael Polanyi and Marjorie Grene, constituting a powerful alternative form of modernity that avoids the dead end of C.P. Snow’s The Two Cultures. An important signpost on the road not (yet) taken.”  (Lawrence Cahoone, Holy Cross, author of The Orders of Nature (2014), The Dilemma of Modernity (1988), and The Ends of Philosophy: Pragmatism, Foundationalism and Postmodernism , 2002)

“Modern times have tended to be dominated by a Cartesian model that is almost exclusively narrowly rationalistic/intellectualist and reductionist. Two prominent challenges to that view have come from Charles Taylor and Michael Polanyi. The time is surely ripe for a deeper engagement between the two and that this volume undoubtedly provides. Its contributors wrestle with the distinctive notions of each (such as Polanyi’s tacit knowledge and emergent being and Taylor’s authenticity and re-enchantment) to see how far a more integrated and inclusive alternative approach can be created.” (David Brown FBA is Emeritus Professor of Theology, Aesthetics and Culture at the University of St Andrews)