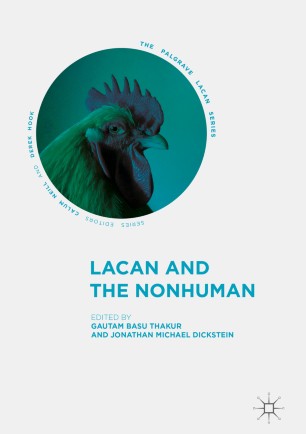 Lacan and the Nonhuman

This book initiates the discussion between psychoanalysis and recent humanist and social scientific interest in a fundamental contemporary topic – the nonhuman. The authors question where we situate the subject (as distinct from the human) in current critical investigations of a nonanthropoentric universe. In doing so they unravel a less-than-human theory of the subject; explore implications of Lacanian teachings in relation to the environment, freedom, and biopolitics; and investigate the subjective enjoyments of and anxieties over nonhumans in literature, film, and digital media. This innovative volume fills a valuable gap in the literature, extending investigations into an important and topical strand of the social sciences for both analytic and pedagogical purposes.

Gautam Basu Thakur is Associate Professor of English at Boise State University, USA where he teaches courses in critical theory, postcoloniality and globalization, and British Empire studies. His first book, Postcolonial Theory and Avatar, was published in 2015.

Jonathan Michael Dickstein is an independent scholar. He teaches literature and media studies and researches connections between psychoanalysis, mathematics, and narrative theory.

“Thakur (English, Boise State Univ.), and Dickstein (independent scholar) have collected essays which integrate a neglected discourse between the recent ‘nonhuman turn’ in the humanities and psychoanalysis … . This new, original angle is lively with possibilities. … The book is suited to faculty and advanced students of philosophy, critical theory, psychoanalysis (especially Lacanian), and the history of ideas. Summing Up: Recommended. Graduate students, researchers, and professionals.” (R. H. Balsam, Choice, Vol. 56 (5), January, 2019)​
Buy options