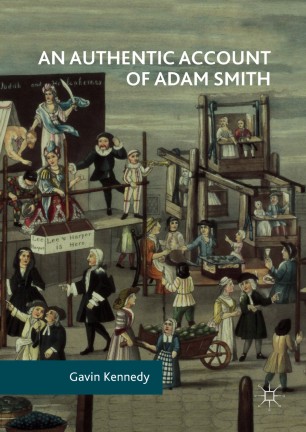 This book is a textual criticism of modern ideas about the work of Adam Smith that offers a new perspective on many of his famous contributions to economic thought. Adam Smith is often hailed as a leading figure in the development of economic theories, but modern presentations of his works do not reflect Smith’s actual ideas or influence during his lifetime. Gavin Kennedy believes that his name and his legacy were often appropriated or made into myths in the 19th and 20th centuries, with many misconceptions persisting today. Offering new analysis of works on rhetoric, moral sentiments, jurisprudence, the invisible hand and The Wealth of Nations, the book gives a new perspective on this important canonical thinker.

Gavin Kennedy is Emeritus Professor, Heriot-Watt University, UK, with 33 years teaching experience in economics, defence economics, public finance, and business negotiation, at Brunel, Strathclyde, and Heriot-Watt universities, and has been a visiting lecturer at universities and colleges in Britain, Canada and Australia, and for numerous government departments. He has published widely in defence, business negotiation and classical economics, most recently, Adam Smith’s Lost Legacy (Palgrave Macmillan, 2005) and Adam Smith: A Moral Philosopher and His Political Economy (Palgrave Macmillan, 2008).